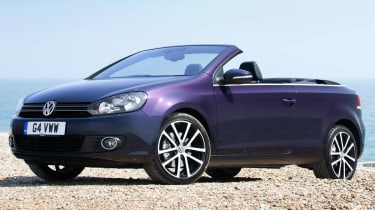 What is it? The Volkswagen Golf Cabriolet in 1.4-litre TSI turbo petrol form. It boasts 158bhp – around 50bhp down on the range-topping 2.0 TSI – but should be around £4000 cheaper at £25,295. The incredibly similar VW Eos (and its folding hard-top) continues production, however, with identical engines and similar pricing. Technical highlights? The folding soft-top motors away in just 9.5sec, and can be operated at up to 18mph, avoiding embarrassing scenarios if you decide to de-roof at some traffic lights which change to green. There's lots of structural reinforcement to compensate for the loss of a steel roof, which result in what we’re assured is the stiffest structure of any open-top car in the Volkswagen group. Weight rises by a chunky 183kg over the three-door hatchback due to the changes. For more details, click here. What’s it like to drive?             While the 2.0 TSI Golf cabrio – essentially a Golf GTI with no roof – provides a pretty engaging driving experience, this less pokey petrol just isn’t powerful enough to be interesting. Pace isn’t as punchy as you’d expect given its 177lb ft maximum arrives in a quoted 1500-4500rpm powerband, and getting up to speed will see you working the engine hard, averaging around 30mpg rather than the claimed 44mpg. The engine doesn’t sound exciting, either, and there’s no reward to be had in trying to hang onto every rev.  The steering and standard six-speed manual gearchange are pleasing and precise but lack genuine feel, so while the Golf is very easy to drive quickly, it’s not huge fun. Instead, it offers a comfortable, cosseting experience: there’s little wind noise with the roof up, and barely any buffeting with it down, while the interior feels high quality and the ride is largely very settled, save for the chunky 18in alloys finding the odd pothole a bit upsetting.  You’ll buy this flavour of Golf cabrio for posing rather than performance. How does it compare? An identically-engined Eos gets a folding hard-top and costs from £24,210, but feels less sporty still thanks to being 42kg portlier. A similarly powered version of the Golf’s Audi A3 Cabriolet cousin is actually cheaper, while the rest of its rivals – Focus, Astra, Megane et al – only come as heavier coupe-cabriolets that are even more pose-biased. Anything else I need to know? If you want a Golf Cabriolet that’s cheaper and greener than the 2.0 TSI, our pick would be the upcoming 138bhp 2.0-litre TDI version. That engine puts in great service in the fun and frugal Volkswagen Scirocco Bluemotion, and we’ve no reason to doubt it’ll do the same here.