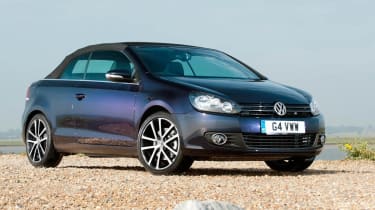 The VW Golf Cabriolet first appeared appeared in 1979 in mk1 Golf shape, but was axed in 2002 when the slightly unloved mk4 version bowed out. It returned in 2011 to top the mk6 VW Golf range, sitting alongside rather than replacing the folding hard-top equipped Eos. While the mk7 Golf is on sale now, ‘old’ generation cabrio sales continue, the range starting at £21,325 and rising to £33,170 for the ultra niche-busting Golf R Cabriolet.  Technical highlights? The soft-top roof – which opens in an impressive 9.5sec, and can be operated while driving at up to 18mph – is similar to the previous Audi A3 Cabriolet's, as is the truncated-tail look of the body, but the Golf's windscreen rake, while 'faster' than that of a Golf hatchback, is not quite as laid-back as the open A3's. So the roof is slightly longer. There's lots of structural reinforcement to compensate for the roof chop, consisting of reshaped sill sections, diagonal bracing bars in the front and rear underbody, boxing-in of the space between rear subframe and spare wheel well, and enclosure of the bottom of the engine bay. The result (at the time of launch in 2011) is the stiffest structure of any open-top car in the Volkswagen group. Weight rises by 183kg over the three-door hatchback. What's it like to drive? The structure feels super-stiff, with very little detectable shake and shudder. It's an impressive achievement, which means the Golf does a decent impression of a sports car if you have the right engine. The 207bhp, 2-litre, direct-injection turbo from the mk6 Golf GTI is probably the most appealing; it helps the cabrio complete 0-60 in less than 7.5sec while chasing a claimed 147mph top speed. Badged as a GTI with the requisite red-trimmed grille and ‘phone dial’ alloy wheels, it comes with the option of six-speed manual or DSG twin-clutch automatic gearboxes. The accurate, nicely-focused steering and pliant ride are common to all versions. We also tried two open Golfs with exactly half the power of the 2.0, which were a 1.6 TDI and a 1.2 TSI. Both have pace adequate for most buyers' needs, and if 0-62mph times around 12 seconds will provide few thrills, the meagre fuel thirst will offer a different sort of wellbeing. Both had sweet-shifting six-speed manual gearboxes. Hood-up, there's hardly any wind noise. This is one impressive soft-top.

Most intriguing – not necessarily for the right reasons – is the VW Golf R cabrio. It initially launched in the UK with a £38,770 price tag, placing it above an entry-level Porsche Boxster and ensuring a single-digit sales figure. In June 2013 VW slashed the price by £5000 – refunding original buyers at the same time – making the R look a bit less frivolous. Still, that’s not enough to endear it to us. Exhibiting the scuttle shake not evident in lesser powered Golf Cabrios and possessing rather too much power for the front wheels (the front-wheel-drive chassis of the Scirocco R chosen over the four-wheel-drive Golf R hatchback’s) as well as a speedometer that humourously goes to 200mph, it’s a car with much more style than substance. Stick with the GTI. How does it compare? Soft-top rivals are few – BMW 1-series, Audi A3 and arguably the Mini, with all three currently late in their life like this Golf. A mk3 Mini hatchback arrives in early 2014, the new Audi A3 Cabriolet is due imminently and a BMW 2-series will launch next year, and there could be a mk7 Golf Cabrio around the same time, based on VW’s sharp new MQB chassis architecture.

For many, though, the current Golf Cabrio’s toughest foes could come from within. The VW Eos is classier and pricier and possessing a folding hard-top (desirable for some), while the VW Beetle Cabriolet is a couple of grand cheaper, and if you aren’t looking to be subtle, it’s more fun to drive, sit in and look at.

For us, the best soft-tops on sale remain those with rear-wheel drive without back seats. If practicality is lower down your list than driving satisfaction, a Mazda MX-5 2.0i Sport Tech (158bhp/£23,095 or 203bhp/£29,995 if you upgrade to new Jota-developed GT spec) or a second-hand Porsche Boxster run rings around the Golf for desirability beyond sheer open-top thrills. Though with boots front and rear, the Boxster actually has an additional 30 litres of bootspace over the Golf (280 beating 250).   Anything else I need to know? The windscreen's top rail is quite slender, with thin sun visors, so it's not as in-your-face as in some convertibles. It adds to the sense of space, which is maintained with the roof up because the glass rear window is large and there's plenty of headroom front and rear. Rear seat space is generous, too, as is the boot – whose capacity isn't affected by the hood's position. The rear seats can fold forward for a bigger load bay.