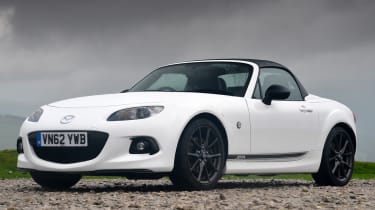 Mazda has announced that the 203bhp Mazda MX-5 GT, which was first shown at the Goodwood Festival of Speed in 2012, has officially gone on sale. The GT is built by Jota – Le Mans specialist racing team – and then sold in limited numbers by the Lodge Garage Mazda dealership in Aylesbury.

Powered by a 203bhp naturally aspirated 2.0-litre engine, the GT was inspired by the MX-5 race car, and the extra power means it can now rival the Toyota GT86 and Subaru BRZ for 200bhp rear-wheel drive fun.

Differences stay close to the concept, including an optional carbon-fibre front splitter, rear spoiler as well as a standard carbon fibre rear diffuser. The MX-5 also benefits from a centrally mounted exhaust-system – said to improve airflow. Adjustable coilover suspension, made by Bilstein, improves the handling.

Performance is improved, with 0-62mph coming 6.4secs and a top speed of 140mph. The interior has been fitted with upgraded Recaro seats, and carbon-fibre trim throughout.

Since the GT made its first public appearance at the Goodwood Festival of Speed, Jota has been refining and developing the model. It can be ordered in three different colours: white pearl, true red and aluminium silver metallic. For those wanting to go on track, there is also a special order Öhlins suspension kit.

Priced from £29,995, the Mazda MX-5 GT offers customers another option for extracting more performance from the MX-5. Although slightly less potent than the BBR supercharged and turbocharged models, it does have the advantage of being an officially sanctioned Mazda product, which is covered by the company’s three-year warranty.