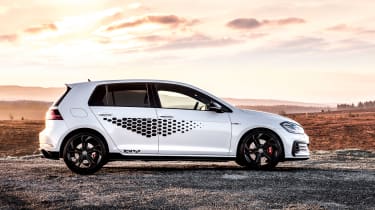 Topping the realigned Golf GTI range, VW has removed the entry-level 227bhp GTI model, now topping it with this GTI TCR, which is based on the thinly veiled concept from Wörthersee last year.

Killed off thanks to those pesky WLTP emissions regulations, the entry GTI now comes as standard with the previous GTI Performance Pack’s 242bhp engine, while the new 286bhp TCR will slip (just) underneath the flagship Golf R, which itself lost 10bhp due to the new regulations.

The new TCR will reach 62mph in 5.6sec, 0.4sec faster than the standard GTI when fitted with the equivalent dual-clutch transmission, and top out at 155mph, with an option to raise this to 161mph

In its latest model-year update, Volkswagen added some attractive new kit as standard. An Akrapovic sports exhaust system now comes as standard, something that was previously an option, adding more sound and sportier exhaust tips to the mix. New wheel designs are also now available, should the standard TCR items not quite cut it.

In addition to the mechanical upgrades, the TCR also rides some 20mm lower than the standard GTI, integrating adaptive dampers as standard on 18-inch, or new 19-inch alloy wheels. The latter are bespoke to the TCR and only available in a gloss black finish. The bodywork has also been subtly revised, with an extended front splitter, side sills and rear diffuser. 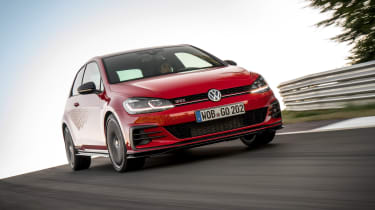 Hidden underneath the new rear bumper is a stainless steel exhaust system, with a further option of a titanium system by Slovenian firm Akrapovič. The brakes have also been upgraded, while the GTI Performance’s limited-slip differential also ensures front traction will be adequately handled.

Inside the cabin Volkswagen has applied a range of bespoke finishes to the seats and steering wheel, the latter with a red 12 O’clock stripe to remind you that you’re in something a little more special than a ‘normal’ GTI.

We’re excited with the prospect of a new flagship Golf GTI model, but can’t help but feel the lack of a manual gearbox might set the tone of the TCR being less involving than the previous Clubsport. Another issue is whether a spiritual successor to the fabulous Clubsport S might be on the cards. With a power output of 316bhp, the Clubsport S still holds the candle as the most powerful production Golf GTI ever, while its unmatched combination of tenacious, grippy, yet thrilling handling, complemented by Volkswagen’s typical polish, made it one of the true stars of the hot hatch genre.

With an all-new Mk8 Golf on the horizon, the gap left to produce a follow-up to one of our favourite ever hot hatchbacks is quickly closing, making it even more imperative that the new GTI TCR doesn’t disappoint as the Mk7 Golf’s final hurrah. 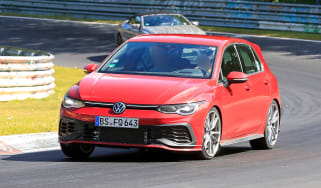