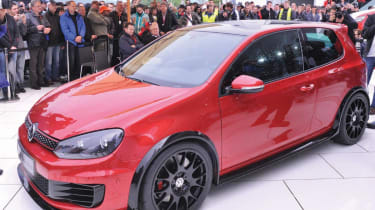 Volkswagen’s unveiled the Golf GTI Excessive, a concept aimed at bringing motorsport feel to the MkVI hot hatch.  VW has based its cosmetic work around ‘Firespark Metallic’ red, though states other colours can be available, despite red being heavily featured throughout, including the natty rear diffuser which glows red when braking. The original 2-litre TSI petrol engine remains unchanged save for the addition of an Akrapovic free-flowing exhaust, which boosts power and torque to 211bhp and 211lb ft – respective rises of 4bhp and 4lb ft.  That means the concept will boast near-identical performance to a standard VW Golf GTI, reaching 62mph from standing in sub-7sec and hitting a top speed just shy of 150mph. Claimed fuel consumption is a rather impressive 38mpg.

The GTI Excessive boasts 370mm brake discs up front and 310mm rear, firmer springs and dampers, a wider track, and Wörthersee 2010 callipers, visible through smart black 19in BBS Wheels. The wider track forces exterior changes, including 30mm larger flared wheel wells each side. The Golf gets a more aggressive stance thanks to piano black side sills, front splitter and rear diffuser. Providing the additions are popular, VW has offered the possibility of a retro-fit accessory pack for the MkVI Golf GTI. Good news indeed. The annual GTI Meet in Wörthersee has been a benchmark hot hatch celebration since 1982, and in recent years Volkswagen has taken the limelight with bold GTI concepts, including the utterly barmy W12-650 Golf, a rear-wheel-drive, mid-engined monster with the power of a Ferrari Enzo. Read our review of it here.