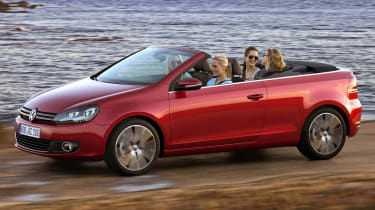 Volkswagen has unveiled its new Golf Cabriolet. A drop-top Golf has been missing from VW’s line-up since the mk4 cabrio was discontinued back in 2002, so this new soft-top represents a comeback. Launching at the 2011 Geneva motor show next month, the Cabriolet’s electro-hydraulically driven roof opens in a tidy 9.5sec and can be operated while driving at speeds up to 19mph. For the first time on an open Golf, the rollover bar is deployed automatically, enabling a sleeker profile with the roof lowered.  Other styling features of note include a shallower screen rake, LED tail lights borrowed from the Golf GTI and an arrow-straight beltline emphasised by a chrome strip running between the cabin’s edge and soft top. Six engine choices will be on hand, all carrying turbochargers. They consist of four TSI petrol engines, ranging from a 104bhp 1.2-litre to the 207bhp 2.0-litre from the Golf GTI hatchback, while there are two TDI diesel options, a 104bhp 1.6-litre and 138bhp 2.0-litre. Options across some of the powerplants include Stop/Start technology and VW’s dual-clutch DSG transmission. Volkswagen promises ‘first class’ torsional rigidity for a convertible, so fingers crossed the driving experience can echo the high standard of its hatchback sibling. Prices will undercut the more upmarket, though similarly sized, Eos coupe-cabriolet (which currently starts from £22,895) the Volkswagen Golf Cabriolet hitting showrooms by summer 2011.