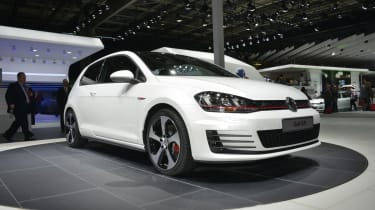 Volkswagen’s new Golf GTI has been shown for the first time at the Paris motor show. The new GTI, based on the same MQB platform as the Audi A3, will be offered with the option of two power outputs: the standard 217bhp and an upgraded 227bhp.

The extra 10bhp is courtesy of a new Performance Pack. It’s not just a re-map though, the upgrade also includes larger front brake discs, and a form of limited slip differential up front – said to reduce understeer. evo has been told that the difference between a stadnard car and one fitted with the Performance Pack is around 12 seconds at the Nurburging Nordschliefe, and also that UK buyers will probably only have to find about £900 extra for it. As such, it looks set to become a popular option.

Styling is evolutionary, and the new-look car features many of the trademark GTI features. The new model is set to go on sale in 2013 along side the standard car.

One bit of surprising news is the fact that the forthcoming Golf R isn't confirmed for the UK yet. Apparently we didn't like the last one enough, and VW is considering whether it's worth creating a right-hand drive version.