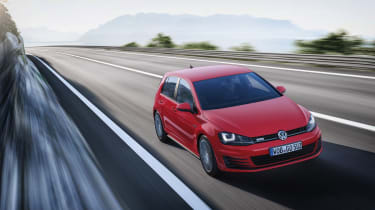 Volkswagen has revealed pictures and details of the new Mk7 Golf GTD, which boasts a standard output of 181bhp and from the company’s new 2.0-litre Common rail diesel engine. The car will be fully unveiled at the Geneva motor show next month.

It’s the most powerful diesel Golf to ever leave the Wolfsburg factory, and with 0-62mph dealt with in 7.5secs and a top speed 142mph, it has the performance to match. It will be available with either the standard six-speed manual or six-speed DSG gearbox.

Thanks to the new engine – an evolution of the previous 2.0-litre TDI unit that brings claimed improvements in refinement and efficiency – the GTD manages to improve on the previous Golf’s CO2 emissions and fuel economy figures: pumping out 109g/km and averaging 67.3mpg.

Volkswagen has given the GTD a new look that draws heavily from the GTI, with new bumpers with rear diffuser, side skirts, smoked LED rear lights and 17-inch ‘GTD’ alloy wheels.

UK prices and delivery dates have yet to be confirmed, but when order books open on 5 March in Germany, prices will be set at €29,350 (£25,420 at current exchange rates).