Prices and specs for the new Mk7 VW Golf GTD announced. It's got more power, too 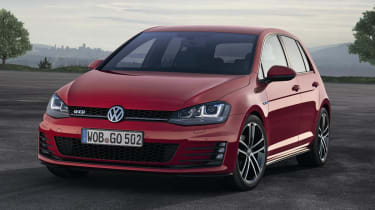 Volkswagen has priced its new 2013 Golf GTD. The diesel hot hatch has returned for the mk7 generation of VW Golf, with more power than before and a small price rise (of £310) to £25,285. Its 2-litre common rail turbodiesel engine now produces 181bhp, up 13bhp and produced from lower down in the rev range, at 3500rpm. Maximum torque rises from 258 to 280lb ft, from the same 1750rpm as before. Once again, it’s front-wheel drive, with the option of manual or DSG gearboxes, both with six speeds. Most GTD buyers will have shunned the petrol-powered Golf GTI in the search of greater fuel economy. The GTD will achieve a claimed 67.3mpg with the manual transmission – an impressive figure for something that will also complete 0-60 in a smidge over seven seconds and hit a 142mph top speed. CO2 emissions are rated at 109g/km, putting the mk7 Golf GTD in one of the lowest tax bands. The DSG version fares worse, offering a combination of 62.8mpg and 119g/km.

Mk7 VW Golf TSI review While the GTD is likely to make a more agricultural noise than the GTI, VW is determined to make them visually very similar. The GTD gets 18in Nogaro alloy wheels as standard, with 19in Santiago rims on the options list. There are also bi-xenon headlights up front, LED taillights at the rear, a subtle body kit (including what VW dubs a ‘large roof spoiler’) and lower sports suspension. The options list includes a rear-view camera, adaptive chassis control, touchscreen satnav and leather seats. Mk7 VW Golf GTD prices start at £25,285 for a manual three-door, rising to £27,355 for a DSG-equipped five door. The twin-clutch gearbox adds £1415, while opting for an extra set of doors attracts a £655 premium. Mk7 VW Golf GTI prices are a little higher, kicking off at £25,845 for a 217bhp three-door.