We drive the all new Mk7 VW Golf in its most potent petrol form (for now), the 1.4 TSI GT 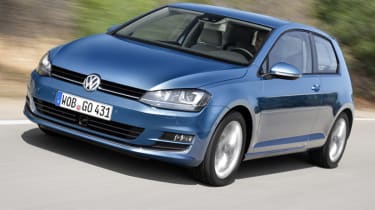 Subscribe today to have every issue of evo delivered straight to you. You'll SAVE 39% on the shop price, and get evo for its original cover price for a whole year!
Subscribe now
Technical highlights?
Where to start? Despite growing in size (most of which is utilised by a more spacious cabin), mk7 Golfs weigh up to 100kg less than their mk6 equivalents, as much as 40kg slimmed from their engines and 23kg from their body structure. There’s a raft of ‘big car’ technology, including lane assist, radar cruise control and crash avoidance systems, while stop/start is standard on every model, contributing to big cuts in fuel consumption.
‘Driver Profile Selection’ is similar to Audi’s ‘Drive Select’, offering a choice of Eco, Comfort, Sport and Normal modes for the steering, drivetrain and chassis, with an Individual option should you want to tinker. And the higher-tuned version of the 1.4 we’ve sampled here gets cylinder deactivation technology, meaning it runs on two cylinders under lower throttle loads to boost economy further.
What’s it like to drive?
Like the mk3 Audi A3 that it shares the VW group’s new-school 'MQB' (modular transverse) chassis with, the latest Golf is a car that corners very competently, with less understeer and body roll than its forebears and an extra sniff of agility thanks to its lower kerb weight. Its electrically assisted steering feels better than the Audi's, managing a decent impression of feel, especially with the smidge of extra weight it boasts in the drive select’s sportiest setting. Push on and the handling is safe rather than scintillating, but there’s plenty of promise for when sportier Golfs – including the new 218bhp GTI – arrive next year.
The biggest step on from the mk6, though, is in refinement. The 1.4-litre turbo four pulls strongly from low revs and while it doesn’t make this Golf a warm hatch, it’s more than brisk enough to keep up with (and overtake) traffic. The smooth manner in which it delivers its power is impressive, while the switch between two- and four-cylinder operation can only really be identified by an icon in the instrument panel. Combine all that with a supple ride (which some badly maintained roads on our Sardinian test route gave a stern test), and the Golf offers an experience as classy as its pricier Audi cousin.
How does it compare?
The 148bhp Ford Focus 1.6T Ecoboost Titanium (£19,950) and 138bhp Vauxhall Astra 1.4T SE (£20,765) cost less, but neither offers the appealing all-round package of the Golf, and they’re both over 10mpg and 20g/km off its claimed 58.9mpg and 112g/km of CO2 emissions, making them notably more expensive to run.
Anything else I need to know?
The new Golf range kicks off at £16,330 – lower than the mk6’s entry point – with an 84bhp 1.2 TSI petrol, while a 104bhp 1.6 TDI diesel (£18,955) is likely to mop up a lot of UK sales. Sub-120bhp engines do get a different (and lighter) rear suspension set up, though, which we’ve yet to try.