The annual Volkswagen Wörthersee concept has been uncovered, this time applying tweaks to the plug-in hybrid Golf GTE 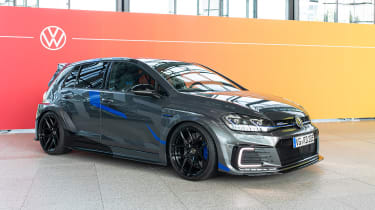 Every year Volkswagen reveals a student concept for the annual Wörthersee meet, but for obvious reasons 2020’s event never came to fruition. In place of its public debut in May, VW has launched its latest concept online instead, the plug-in hybrid Golf GTE HyRACER.

Making its debut at the Autostadt in Wolfsburg, the model is the result of months of work undertaken by a group of apprentices. It’s based on the Mk7 Golf GTE, and while it perhaps lacks the depth of changes seen in full motor show concepts like the 641bhp Golf GTI W12, it’s still worthwhile as an example of the passion and creativity in VW’s latest talent pool.

The car’s new bodywork is akin to that of VW’s GTI TCR racer, with a redesigned front apron including a significantly enlarged front intake and a pronounced splitter. Most notable is the use of widened arches for an 80mm increase in width, helping accommodate new 19-inch wheels wrapped in 265-section rubber. The rear is dominated by an aggressive diffuser with a large rear spoiler featuring the extended brake light from the Arteon.

Specific details on the powertrain and performance have not been revealed, but we do know the GTE’s standard 1.4-litre turbocharged four-cylinder and electric motor powertrain arrangement produces 247bhp, up 43bhp over the standard Mk7 GTE. 0-62mph is likely to come marginally sooner than the 7.6sec of the standard car, with top speed in excess of 138mph. Volkswagen has also fitted a sports exhaust system with double central exits, lowered suspension with 40mm reduction in ride height and larger 380mm front brake discs. 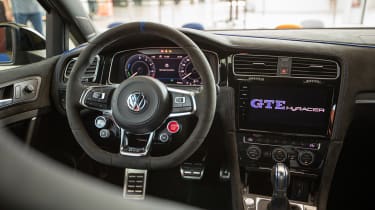 The cabin has also been trimmed with Alcantara on the seats and dashboard, and contrasting blue piping and stitching chosen to reference its electrified powertrain. Carbonfibre trim has been applied to the doors, the steering wheel now features the same red start/stop and drive mode buttons as the Audi R8 and even the infotainment screen has seen a GTE HyRACER rebrand.

As with all Wörthersee Volkswagen concepts, there are no plans to put it into production.