Is VW's super-smooth, ultra-clever automated manual gearbox a step too far in a great GTi? 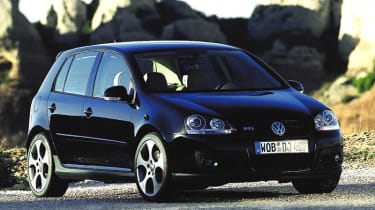 This is the future. The rise and rise of the automated dual-clutch manual gearbox is upon us. The first DSG system appeared in the Audi TT V6 last year and it has since found its way into other Audi products. Now it's a £1325 option on the superb new Golf GTi. It's a stern test of the new 'box, for it's the first time it's appeared in a genuinely exciting and cutting-edge driver's car. There are rumours that Porsche (which has previously dismissed paddle-shift 'boxes as being too harsh and inefficient) is looking at a similar system for the next GT3, while another VW Group car, the Bugatti Veyron, should follow soon after. The death knell for the manual gearbox? Now, here at evo we're proud Luddites when it comes to changing gear, but in recent months even we've had to admit that some of the latest paddle-operated manual 'boxes are getting close to perfection. The best is that of the Ferrari F430, a system so good that Richard Meaden urged us not to deny ourselves this new dimension of driving enjoyment. Its blend of savagery and speed allows for more commitment and more options into and through a corner - thrills that make up for the loss of the tactile pleasure of a peachy shift. The DSG 'box is quicker still and so smooth it makes even the F430's shift feel slightly slow-witted. Can you see where this is headed...? Well, hang on a minute. This DSG doesn't feel much like a manual when you climb behind the wheel and clock a familiar auto gearstick, complete with P, R, N and D markings. Okay so there's an S for Sport and you can knock the lever left into manual mode, but that's not unlike a torque-converter auto. And the paddles mounted behind the steering wheel feel very familiar, just like those of an S4 or RS6. A manual 'box might lurk somewhere in there but VW has done a good job of disguising it as an auto. Into D and you'll still struggle to detect that the DSG is any more than an eerily smooth automatic. That you're into 6th by about 35mph is at odds with the Golf's tight damping and hunkered-down stance. Slip the lever into S and the GTi hangs onto its ratios longer, downchanging keenly with the merest whiff of pressure on the brake pedal, but to be honest it's so 'sporty' that driving the Golf smoothly is almost impossible. You feel locked into qualifying mode and the S setting never allows you to row along on the GTi's ample spread of torque. Of course GTi drivers will probably stick it into manual and enjoy instant up- and downshifts, accessing every last bit of performance and engine braking. If they do there's no doubt the DSG offers incredible shift speed - in effect it is instantaneous, as drive is never disengaged - and VW has engineered in a little more character than Audi manages. It switches gear with a delicious 'pop', and it's mesmerising to see the revs soar or die in an instant between shifts. To use the DSG in anger is certainly more engaging than an auto with manual over-ride. It's totally obedient (unlike an auto with paddles) and feels much more aggressive - blipping on downchanges and changing up with none of the slur of an auto. However, ousting the auto was never the plan and judging the DSG against either a conventional manual or the best of the automated manual systems it doesn't look so convincing. It comes down to the DSG's stepless delivery. There's none of the savagery that makes the Ferrari F1 'box so compelling, nor the involvement of a third pedal and H-gate. The paddles feel like they're operating electrodes rather than mechanical linkages, which has the effect of stripping away the excitement. Everyone who drove the car ended up sticking it in D, which is probably all you need to know. Damning a system for being too good might seem absurd, but when technology detracts from the experience rather than enhances it, surely it's gone too far?