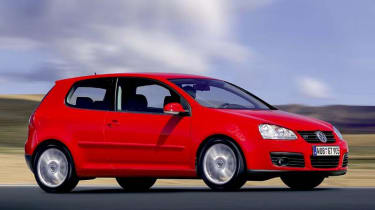 Real men don't drive cars with 1.4-litre engines - do they? Well, it depends. Forget about engine size, and consider instead a VW Golf with 168bhp and a torque curve whose peak of 177lb ft is more of a plateau, all the way from 1750 to 4500rpm. The result is a maximum speed of 136mph, and 0-62mph acceleration in 7.9sec. Does that sound interesting? Does it sound possible, even, with a Polo-sized 1390cc engine? Everything is possible with pressure-charging. The grey-haired among us remember Formula 1 cars with 1.5-litre turbo engines that delivered over 1000bhp in qualifying 'grenade' tune. So 168 from 1.4 litres isn't stretching the limits of the possible. What is significant is the way it has been done, maintaining perfect driveability and, one trusts, Volkswagen's normal standards of reliability and durability. Equally of interest is why it's been done. A turbocharged engine is an obvious way to go, except that without resorting to clever technology - linked twin turbos, or variable geometry, which remains beyond the reach (in a petrol engine) of anything less than the new Porsche 911 Turbo - the driveability is going to suffer, especially at the bottom end. Volkswagen's answer is to use an engine-driven Roots-type blower to supercharge the input to the turbo. The supercharger output is varied, via a blow-off valve, so its maximum boost can be applied from very low engine speeds without blowing the whole thing apart at 6000rpm. In effect, the supercharger is filling in the lower parts of the desired torque curve that the unassisted turbo could not reach. From around 4000rpm, the turbo - well into its stride - does it all. There's more to this engine than its two-stage supercharging system, though. Its fuel system is Volkswagen's FSI direct injection, suitably modified to handle higher fuel flows. The block is nominally that of the 16-valve 1.4-litre normally fitted to both Polo and Golf, but the material has been changed to a special grey-cast iron to withstand the higher combustion loads involved. Most impressive of all, when the powertrain is sitting on a display stand, is the way the inlet manifolding is wrapped around the basic engine like some kind of python, linking the inlet proper with the supercharger (low down, behind the engine and snuggling against the front bulkhead) and the turbocharger (in front of the engine). The whole thing is something of a plumber's nightmare but the detailing is beautiful. The thing is, why has Volkswagen done it? After all, this is a 168bhp engine added to a range that already includes the 168bhp 2-litre TDI and the 168bhp naturally aspirated 2.4-litre VR5 (although the latter no longer comes to the UK). There's also the 197bhp 2-litre Turbo FSI engine fitted to the Golf GTI (which is why this new 1.4-litre has been christened Golf GT). The answer is efficiency. This is a classic downsizing exercise and it pays the classic downsizing bonus: economy. The Golf GT comes with an official fuel consumption of 38.2mpg, while the equivalent VR5-engined car used to deliver 31.7mpg. True, the 168bhp 2-litre Golf turbodiesel achieves 47.9mpg, but then, if you want a diesel, that's the way you'll go. Where it matters, the Golf GT powertrain is impressive. Bags of punch low down, and delivered on and on through that turbodiesel-like torque plateau; except that this one carries on at the top end, where the diesel starts to weaken and call for an upshift. But there are six speeds anyway; possibly they aren't essential but these days it's what we expect. A supercharger boost-gauge shows when the turbo is being assisted. Otherwise you'd never guess at the blower's presence. If you were simply to drive the car without being told what was under the bonnet, you might guess at a particularly good 16-valve 2-litre. But it isn't; it's a 1.4. Question is, can you live with that?