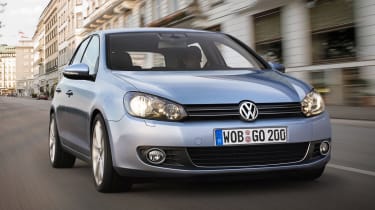 Volkwagen is about to launch the mk6 Golf. Question is, will the public notice? We ask because, Scirocco-esque horizontal nose treatment apart, the new Golf looks too much like the last one.

Looks do not deceive - the mk6 has the closest relationship with its predecessor of any Golf in history. It’s simply a partial re-skin with a plusher but cheaper-to-make interior. Which is fine: the mk5 was a good car that cost too much to make.

Volkswagen hypes up the mk6 with talk of tactile surfaces and aural refinement, but the interior is hardly exciting in its design and the underlying roar from the coarsely grained roads at the Iceland launch would have drowned out any engine noise without VW’s help. Add the DSG transmissions of all the launch cars (six ratios for the turbodiesel, seven for the two turbo’d and supercharged 1.4 TSIs) and the new Golf becomes a hard car to interact with.

Those TSI engines give either 120 or 158bhp, but neither has the spirit of the torquey, rev-hungry 168bhp TSI in the previous Golf GT. A manual gearbox and the chance to hear the engines’ efforts may help, but as tested the new Golf is a bit of a dullard. At least the adaptive dampers now being offered as an option work better than the Scirocco’s, offering genuine suppleness instead of three grades of firmness.