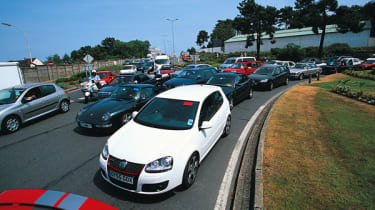 It's infuriating when you warn other people of something and then trip up on it yourself. Mostly because you don't really get full enjoyment out of saying 'I told you so'. Yup, the gendarmes stitched me up like a kipper on the run down to Le Mans.

Long straight bit of road and I was overtaking a lumbering lorry. Quarter of a mile later there was some shrubbery on a roundabout (no big fluorescent van) from which a man with a small hat, leggings and knee-length boots emerged to wave me to the side of the road. The underhand method of entrapment didn't strike me as being entirely cricket, but nevertheless we conversed.

I was tempted to teach him some manners and say 'Pleeease', but he was wearing some sort of pistol and the leggings were scaring me.

Apparently chip and pin hasn't reached them yet and I'm not paid enough to carry 90 euros around willy nilly, so he relieved me of my driving licence and pointed me in the direction of a suspiciously convenient town with an ATM.

Thankfully the rest of the journey was blissfully uneventful, and was a good opportunity to get familiar with the new Michelin Pilot Sport 2 tyres - the original Bridgestones had served a more-than-acceptable 15,000 miles, so I'd swapped both fronts and rears for new rubber just before we left. I'll let you know more about those next month.

Swindling Gallic cops apart, I enjoyed my first Le Mans enormously. I even managed to stay up all night, which was definitely worth it. Or at least it was until it reached about 3.30am the following morning and I was still chasing the xenons back up to Northamptonshire. But then no one ever said that endurance driving was easy.