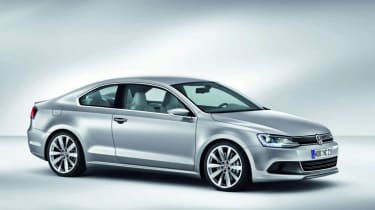 Volkswagen’s star at the Detroit motor show is this, the NCC. That stands for New Compact Coupe, but essentially it’s a two-door version of the Golf and packs a hybrid powertrain. Ignore the connotations the H-word may spring to mind though, as performance-wise this is no Prius: the combination of a 147bhp, 177lb ft 1.4-litre TSI engine and a 25bhp electric motor ensure a brisk 8.6sec dash to 62mph and a 141mph top speed. The NCC’s real party trick, though, is its rather impressive 67mpg fuel economy and mere 98g/km of carbon emissions. Those figures are courtesy of several smart bits of tech. Volkswagen’s acclaimed seven-speed DSG twin-clutch gearbox features, while that electric motor – powered by a lithium ion battery – can power the car on its own, making the NCC a ‘full hybrid’. When it’s electric-only, the coupe will shut down its petrol engine to reduce drag and resistance, something that also occurs when lifting off the throttle, effectively coasting the car. Regenerative braking completes the eco-friendly fitments. As far as styling goes, it’s a pretty good-looking car. While it eschews the striking looks of the Scirocco, it manages to turn the safely styled Golf into a smart coupe that’s not unlike a less expensive Audi A5 – no bad thing. Everything about the NCC looks reassuringly roadgoing-spec, meaning that if VW decides to give it the production nod, you shouldn’t have to wait too long to get hold of one, with the US likely to be its core market. Non-hybrid powerplants – both petrol and diesel – would likely be offered with prices kicking off above an equivalent Scirocco at around £24K.