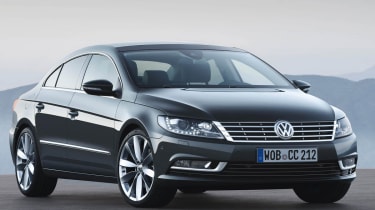 Volkswagen is to set to unveil an updated version of the CC coupe-saloon at the Los Angeles motor show in November.

The big change is the removal of the Passat name – now it’s just called the Volkswagen CC – and the new model features a host of styling and tech tweaks. Front end design has been changed to bring the CC in line with the new Passat saloon, with a revised radiator grille sharing the same horizontal lines as the rest of the Volkswagen range. It keeps the pillarless doors of the previous model.

Two turbocharged, direct injection ‘FSI’ petrol engines will be available, in  1.8-litre and 2-litre forms (developing 158bhp and 207bhp respectively). We recently drove the 1.8 TSI in the Passat saloon, where we were impressed by the engine’s combination of power and economy. Two 2-litre turbodiesels will also be available, in 138bhp and 168bhp states of tune. Cars fitted with the more powerful engines will get a traction control system claimed to mimic the effect of a limited slip differential.

UK order books open in early 2012, with the first customer cars expected to be delivered in March. Expect prices to be announced after the car’s unveiling on November 16th.