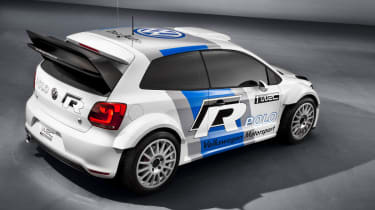 Volkswagen is looking increasingly likely to produce a Polo R to coincide with its entry into the WRC in 2013. A model above the Polo GTI was previously viewed as a bad business case by the company, but the marketing possibilities provided by world rallying turn the case around.

The mock-up at the rally car’s launch carried ‘R’ branding which dominated the livery, and it’s labelled as the Polo R WRC. A road-going car could use a more powerful version of the Volkswagen Group’s 1.4-litre, turbocharged and supercharged motor, probably with over 200bhp, a healthy rise from the Polo GTI’s 178bhp.

It would likely cost 10-15 per cent more than the GTI, topping £20,000, though a concern for VW would surely be the risk of the R treading on the toes of the 207bhp Golf GTI, which starts at £25K. With a potentially better power-to-weight ratio, it could outperform it, too…

A four-wheel drive transmission is a potential for a Polo R, which would perhaps share a system being developed for the forthcoming Audi A1. It would give the VW a unique selling point over talented front-driven rivals such as the Renaultsport Clio 200, which starts at £16,930, and the £23K Vauxhall Corsa VXR Nurburgring Edition which has been winning plaudits of late.

It’s all speculation for now, of course, and we wouldn’t expect to see a Polo R surface until the WRC car’s 2013 debut. Fingers crossed it does, though.

VW Polo GTI versus its hot hatch rivals on video...