Volkswagen Up news and pictures

Volkswagen has revealed its new city car, the Up, to rival the Toyota iQ, Smart and Fiat 500 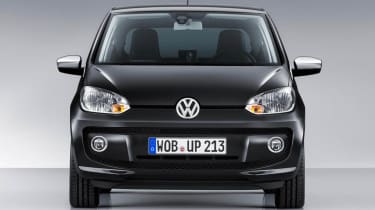 Four years after VW showed us its Up concept car at the 2007 Frankfurt Motor Show, the marque is putting its entry-level hatchback into production.  Unlike the original concept, the production Up (the 'up!' in VW speak) will have a more conventional front-engine, front-wheel-drive layout as opposed to the rear-engined, rear-drive of the concept. Two 1.0-litre, three-cylinder petrol engines will initially be available, either in 59bhp/56mpg or 74bhp/54.6mpg form.  There are two transmission options available too, the standard five-speed manual or a clutchless six-speed automatic. Thanks to Volkswagen’s BlueMotion technology both versions boast sub-100g/km CO2 emissions, meaning the Up will be both tax and congestion charge exempt. Available in European showrooms in December 2011, prices are expected to start at around £8000, a good chunk cheaper than the £9995 price tag of an entry-level Polo.