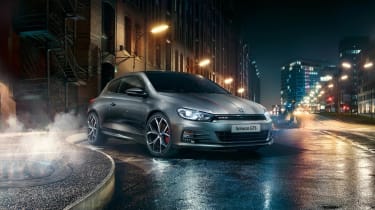 Volkswagen has introduced the Scirocco GTS and three other new special editions to bolster its 2016 lineup.

The GTS develops 217bhp from its 2-litre, four-cylinder turbocharged powerplant, and puts 258lb ft of torque (at 1500rpm) to the front wheels.

A six-speed manual or DSG transmission handles drive, each enabling a 0-62mph time of 6.5sec. Top speed is 153mph for the manual and 152mph for the DSG.

The current shape Scirocco was introduced in 2008, but you’d be hard-pressed to identify it as an eight-year-old design – as in Scirocco R form, the GTS is sharply-styled.

It uses R-Line body styling (there’s a deeper front bumper and side skirts, and a spoiler atop the rear screen), with GTS badging on the front grille and on the tailgate.

Door mirror casings are gloss black and the rear glass features a 65 per cent tint. This contrasts with the standard Urano Grey paintwork, while Flash Red, Pure White, Oryx White (a metallic shade), Indium Grey (also metallic) and Deep Black pearl. A central stripe down the car is coordinated with the body colour.

The interior is also based on R-Line models. To that end, you get a set of sports seats (in leather, with a GTS logo and red stitching), metal-finished pedals and a trio of gauges on the top of the dashboard.

To that the GTS adds a golf ball effect gearknob with GTS branding, GTS-striped seatbelts and chrome door sill protectors that – you may be surprised to learn – also feature the GTS logo. 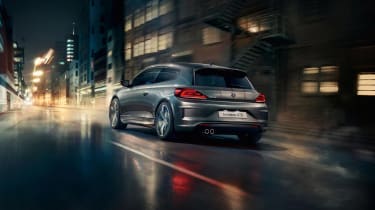 The package adds a black front grille, electric tilting sunroof and 18-inch wheels – of ‘Lakeville’ design on the GT Black Edition and ‘Talladega’ on the R-Line Black edition.

Inside there’s Nappa leather upholstery (in black, naturally), and carbonfibre-style interior trim pieces. Each car costs £29,150, a £575 step up from the models on which they’re based.

Cheapest of the new special editions is the Look Up at £9995. Power is nothing to shout about, at 59bhp, but details are sharp – 15-inch alloys, black wing mirror casings and black foil decals set off yellow, red or white paintwork.

All four special edition models are available to order now.