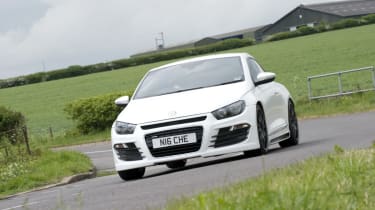 It was never going to take long. From the day it was announced the Scirocco found itself in the cross-hairs of after-market tuners, it was like all their Christmases had come at once. Sculpted lines that demand a little extra dressing to really set them off and a VW engine so ripe tweaking a whole industry has grown up around it made it irresistible, and now that VW have announced that their own hot ‘R’ version will arrive here in the autumn with 261bhp and a price tag of £26,000 those tuners need their products to be out there now.

Of those the Niche Automotive RC280 is one of the most intriguing, partly because of its price and the fact that as the main part of their business is leasing, this is one of the few modified cars that can be leased, and partly because they haven't gone chasing the big output numbers that many tuners become obsessed with at the expense of drivability. But it is the beefed looks that demands attention first, particularly from the front where a Reiger nose that incorporates an R8 grille makes it more aggressive than the Focus RS.

Vented side skirts and a rear diffuser balance these out along with the 19-inch BBS wheels (the traditional choice for VW tuners) and the 25mm Eibach lowering kit. Lift the bonnet and youill discover the aesthetic makeover continues with a colour-coded engine cover and a carbon induction kit that draws cold air from behind the fog light. This of course is just the start of the engine modifications that include an Evolution dump valve, a Jetex three-inch down pipe, a sports cat and a stainless exhaust system and is finished off with an Autograph remap. Continuing the restrained theme, these changes increase the aural interest without raising the boom and whistle volume to uncomfortable, headache inducing levels, and the delivery retains the standard car’s linearity while delivering a decent slug of extra torque.

The RC280 lacks the ultimate level of exploitability provided by the RS Focus’s Revoknuckle system, but with a little help from the well-judged traction control system the Vredestein Ultrac Sessanta tyres will deploy the power even on the roughest of corners. That same traction-control system and the fact that you can’t switch it out completely does become a hindrance on track, which is unfortunate because otherwise it performs well. The Tarox brake upgrade resists fade, while it turns-in cleanly and remains flat and consistent through mid and high speed corners.

Back on the road the slight increase in ride stiffness creates a similar benefit at the helm, there¹s a welcome extra touch of immediacy and feel, although the high level of overall grip means that there is little mid-corner adjustability to play with. Overall though this is a well executed upgrade with a quality feel to the work, if the Scirroco appeals and you can't wait for the official R, then the RC280 could just be car you’re after.