Pictures of the new five-door Up have been released, along with details on pricing and equipment. 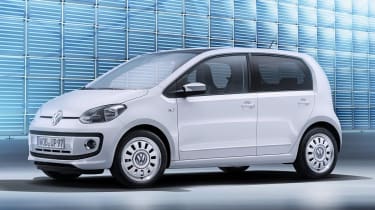 The first pictures of Volkswagen’s five-door Up have been released, showing that the transformation from three to five doors hasn’t spoiled the sup-compact nature of the Up, retaining the same dimensions and overall footprint as the three-door Up.

Orders will start from 6 March when the car is officially launched at the Geneva motor show, and it's expected hit the roads in Germany during May, with other European countries following about two months later.

As expected the Up five-door will only differ very slightly from the three-door version, keeping the same three-cylinder BlueMotion tech petrol engine and identical trim options. VW claims that the more practical option will cost €475 (about £400) more than the standard car.