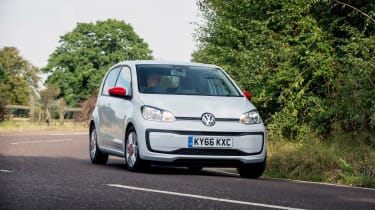 The Volkswagen Up is undoubtedly one of the more talented small cars on the market, but thus far it’s lacked the kind of on-paper performance that would put it on the radar of an evo reader.

While we're waiting for a proper Up GTI - a car we've recently driven in prototype form but won't appear until 2018 - VW has at last seen fit to turbocharge its smallest offering. Whch begs the questions: is the Up TSI worthy of your attention?

There’s no doubt that, both on paper and on the road, the new 1-litre turbocharged three-cylinder engine offers significantly improved performance compared to the non-turbocharged three-pot options VW also offers.

Where the most powerful Up could previously muster only 74bhp at 6200rpm, the TSI lifts that to 89bhp at a more relaxed 5000rpm (still shy of the 114bhp of the upcoming Up GTI). Even more useful is the increase in torque: 70lb ft at 3000rpm (which, in fairness, made the non-turbo car perfectly fit for purpose) becomes 118lb ft at half the crank speed.

The difference in delivery night and day. While the non-turbo 1-litre is willing and bimbles happily around town on small throttle inputs, out-of-town driving requires your right foot near-permanently welded to the bulkhead. The naturally-aspirated engine has a habit of hanging onto revs between gearchanges too, which is frustrating when trying to execute smooth changes.

It's better news with the TSi. Seemingly less than half the throttle in the Up TSI achieves similar acceleration, and while the TSI never feels supermini fast it still retains all the characteristics of the regular car – refinement, frugality (45mpg even in brisk driving, but frequently mid-50s) and relative silence – while adding welcome real-world performance. The standard five-speed gearbox now has a smoother shift, too. On paper? 0-62mph, previously a 13.2-second slog, is now dispatched in 9.9sec. 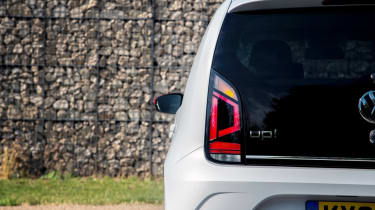 Performance aside, the Up TSI shares many of its other characteristics with other Ups. It feels remarkably grown-up for a small car; tyre, road and wind noise are relatively hushed, and the cabin is spacious and well-built. There's a real sense of being in a scaled-down Golf.

This recent facelift and interior update enhance that feeling further still, and while it now lacks the charming classic-Beetle-style simplicity of early, more basic Ups, it’s arguably a little more liveable, and for some, more useable car as a result.

Another difference between the TSI and those early cars is a more substantial feel to the way the Up gets down the road. It never felt flimsy before, but you controlled the car through a surprisingly thin steering wheel rim, and on 14in wheels and 165-section tyres, the Up felt like it weighed very little at all. The current Golf-style steering wheel has a thicker rim, and the tyres and wheels are wider and larger (optional 185/50 R16s were fitted to our test car). It hardly makes the Up feel weighty or leaden, but it does feel more tied-down, a little firmer, and appropriately given the more powerful engine, sportier.

That said, these changes don’t transform the Up into some kind of four-fifths scale Golf GTI. The steering, consistent though it is, isn’t quite sharp enough for that, nor does it deliver quite enough feedback. The flat-faced seats are comfortable in a straight line but unsupportive in quicker cornering, and front-end grip runs out soon enough when you begin attacking corners.

Other minor things irk from a driving enthusiast’s perspective – the pedals are poorly-aligned for heel-and-toe downshifts and the engine is reluctant to rev on quick prods of the throttle. The low-down urge of the engine can rapidly overwhelm an inside tyre accelerating out of corners too, which can feel scrappy. And while it’s more powerful, there’s no sport exhaust note to accompany the extra performance.

But that shouldn’t take away from what is otherwise an entertaining little package. The extra torque in particular no longer leaves the Up feeling out of its depth - and breath - on faster roads, the more substantial wheels and tyres generating higher cornering limits, and it's a sharp looker too.

It's a good car then, but we're still eager for that proper Up GTI. The wait until its debut in 2018 will be excruciating, given the lack of suitable alternatives. 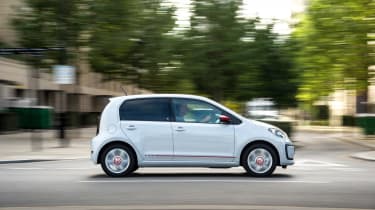 It competes in a crowded sector. Obvious rivals include the near-identical Skoda Citigo and SEAT Mii, but VW has pulled rank by only offering the turbocharged unit in its own car - there's no Citigo vRS or Mii Cupra on the horizon, sadly.

For similar shove, you’ll have to look Smart or Renault’s way with the Fortwo, Forfour and Twingo (£12,215 for the 89bhp Forfour Passion, £11,845 for the 89bhp Twingo Dynamique). Both rear-drive models are more characterful than the Up, but less spacious and no more entertaining to drive. We've recently driven the Renault Twingo GT, which offers more power than the Up (it'll be a closer rival to the GTI), and while it's no Renault Sport it's probably more fun than the Up and at £13,755, less than the High Up tested here.

As little as £10,995 gets a Fiat Panda with the firm’s 84bhp, 0.9-litre twin-cylinder ‘TwinAir’ turbocharged lump. Real-world economy is nowhere near the 67.3mpg claimed, but it’s fun to drive and again makes the Up feel slightly short on personality. As does its Fiat 500 equivalent, available in sporty 'S' trim. 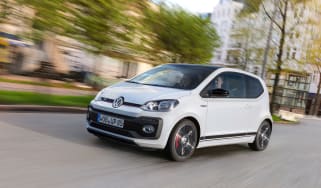 Volkswagen Up GTI will finally reach showrooms early next year – will it live up to the badge?
Turbocharged Volkswagen Up goes on sale from £12,055 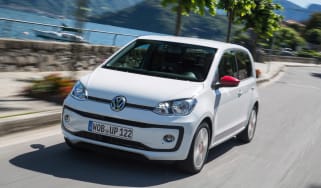 Turbocharged Volkswagen Up goes on sale from £12,055

VW finally offers a faster version of its stylish city car; range as a whole starts at £8995
Volkswagen Up Black review 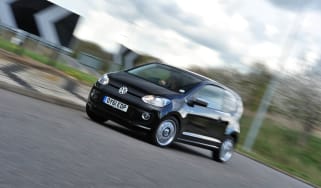 We drive VW's classy new city car in the UK. What's it like in top-spec Black trim?
Volkswagen Up GT review 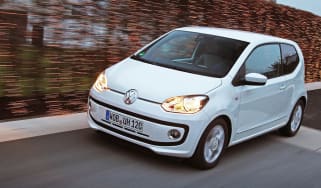 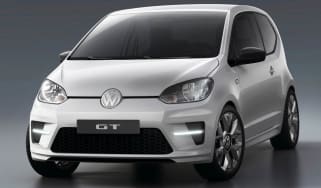 Volkswagen Up GT set for production

The Volkswagen Up GT is expected to make production, with a feisty 110bhp turbo engine to tackle Twingo Cup and Swift Sport
Volkswagen reveals five-door Up 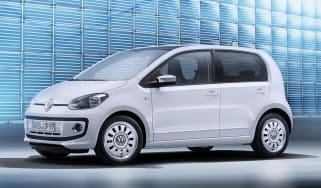 Pictures of the new five-door Up have been released, along with details on pricing and equipment.
Video: VW at Frankfurt 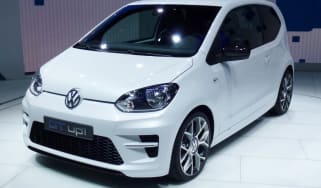