Volkswagen Up GT set for production

The Volkswagen Up GT is expected to make production, with a feisty 110bhp turbo engine to tackle Twingo Cup and Swift Sport 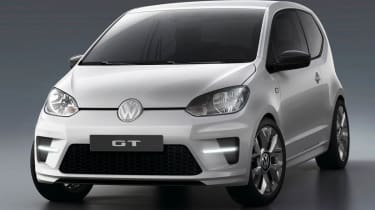 Volkswagen’s Up GT is reportedly heading into production as the company’s smallest hot hatch. The sportier Up is expected to feature a turbocharged version of the standard car’s three-cylinder, 1-litre engine. Uprated to around 110bhp, it will be nearly twice as powerful as the 60bhp base Up. The GT will drive the front wheels though a six-speed gearbox, and boast styling tweaks including bigger alloy wheels and a distinctive bodykit. A twin exhaust and spoiler are tipped to add to the sporty look. It will slot into the VW range under 178bhp Polo GTI and 207bhp Golf GTI, both of which have grown bigger with every generation, and will compete against rivals such as the feisty Renaultsport Twingo and new Suzuki Swift Sport. With 131 and 134bhp respectively, both are significantly more powerful, but the Up should weigh around 100kg less, keeping its performance in touch. And if it inherits some charm from the talented VW Lupo GTI, then it should prove a stern challenge for the established small hot hatch class champions.

Swift Sport, Twingo Cup, Abarth 500 and more battle it out