Volkswagen Up GTI will finally reach showrooms early next year – will it live up to the badge? 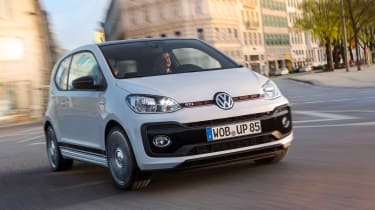 The new Volkswagen Up GTI will go on sale for £13,750 on the road – significantly less than we expected when VW’s latest tot-hatch was unveiled last year.

That number gets you a basic three-door model, while a five-door version will also be available with a starting price of £14,150. For some context, it’s only £895 more than the current range-topping 89bhp ‘High Up’-specification models in their respective three- and five-door forms.

The five-door Up GTI is also only £100 more expensive than the five-door Renault Twingo GT – currently the Up’s closest conceptual rival, with few other companies offering hotter versions of their smallest, cheapest cars. 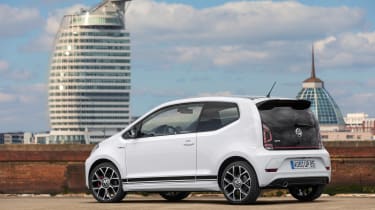 Volkswagen has made much of the new GTI’s similarities to its very first hot hatchback, the Mk1 Golf GTI – Wolfsburg’s marketers say it ‘follows the genetic heritage’. With 113bhp from a 1-litre turbocharged three-cylinder engine (derived from that of the Up TSI) and 147lb ft of torque, the Up GTI makes 5bhp more than its historical forbear, and while a 997kg kerb weight makes it a little heavier, performance is still brisk.

How brisk? 8.8sec to 62mph if VW’s figures are to be believed (a couple of tenths quicker than the Mk1 Golf), with a 122mph top end. Again, those numbers also shade the Twingo, by a full two seconds to 62mph and 19mph over the Twingo’s limited top end.

The new #Volkswagen up! GTI meets its spiritual predecessor... and finds they've got a lot in common. Read more here http://www.evo.co.uk/news/19390/volkswagen-to-reveal-long-awaited-up-gti-at-worthersee

Aesthetically, Volkswagen has delivered typically restrained styling, but with just enough GTI cues to justify the badge. Everything’s a throwback, from the double side stripes to the plaid interior fabrics. With one exception, the colour palette is even derived from the original Golf GTI – with Tornado Red, Pure White, Dark Silver, Black Pearl, and a new Costa Azul blue.

> Click here for our drive of a Up GTI prototype.

Below the honeycomb grille sits a subtle red stripe, just like other GTIs in the VW range. The Up GTI rides 15mm lower on stiffened suspension, while at the back there is an extended rear spoiler and a red stripe along the base of the glass tailgate.

Inside, the Up GTI shares yet more design cues with other GTIs, including a contemporary take of the classic tartan fabric trim, a flat bottom GTI steering wheel, unique dash trim and GTI badges along the door sills.

With quite the heritage to live up to, Volkswagen has been taking its time in the development of the Up GTI, but are adamant it will live up to the nomenclature by offering that famous GTI driving experience. We’re driving the new GTI as you read this, so we’ll find out for sure very soon indeed.