Turbocharged Volkswagen Up goes on sale from £12,055

VW finally offers a faster version of its stylish city car; range as a whole starts at £8995 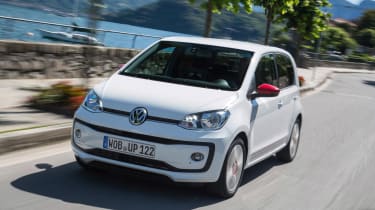 Ever since the VW Up was first revealed at the Frankfurt motor show in 2011 – alongside a sporty Up GT concept that promised around a hundred horsepower – the lack of a truly peppy version has always been a little disappointing.

No longer: Earlier this year Volkswagen unveiled the new Up, with subtle styling tweaks, interior improvements, dynamic fettling and, for the first time, a new turbocharged engine.

VW has now announced pricing for the revised Up range. Basic 'Take Up' models start at £8995 and that new turbocharged car begins at £12,055 in 'High Up' trim, and all are available to order now. Five-door models are £400 more and those with VW's automated manual transmission add £900 to the price of the equivalent manual.

Like existing Up models, the new turbocharged TSI unit is a three-cylinder unit, and 1-litre in capacity. Unlike other Ups, which top out with a willing but ultimately underpowered 74bhp unit, the new 1.0 TSI develops 89bhp, and a useful 118lb ft of torque from 1500rpm – compared to the 70lb ft at 3000rpm of the standard car.

What the original couldn’t do is pair that with economy to challenge other modern city cars: a combined figure of 64.2mpg is the estimate, with CO2 emissions of 108g/km. 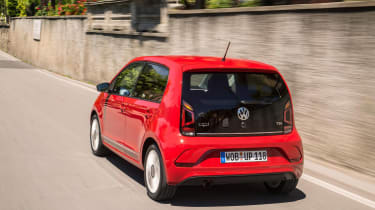 That's a little more than VW estimated on the car's unveiling, but those aiming for ultimate economy can still opt for the 59bhp and 74bhp three-pots, which offer CO2 figures starting from 96g/km. They'll be bettered in turn by a revised e-Up electric version, details of which will be announced at a later date.

Beyond the performance improvements, VW has also tweaked the Up’s styling. Only slightly, mind – there was arguably little wrong with the Up in the first place, and VW knows not to mess too much with a winning formula.

LED daytime running lights are standard, as are new headlight designs, revised front and rear bumpers (the latter of which has a ‘prominent rear diffuser’, though you’re better than us if you can spot it), and new tail lights.

Two new stereo systems have joined the equipment list, while an Up Beats special edition also features a 300-watt Beats Electronics sound system, as founded by Dr. Dre. Smartphone integration (via the Maps & More touchscreen, which clips to the top of the dash) has also joined the kit tally, along with Climatronic automatic aircon.