We've driven a prototype version of the Volkswagen Up GT - is this the spiritual successor to the Lupo GTI? 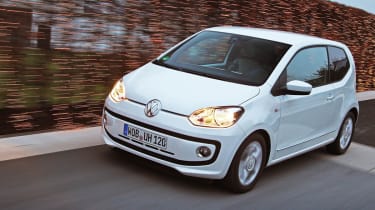 If things go to plan – and Volkswagen actually signs it off – then this could well come the spiritual successor to the much-missed Lupo GTI. The Up GT is a hotted-up version of Volkswagen’s recently-launched city car, powered by a turbocharged three-cylinder petrol engine and with performance to put it in contention with current crop of junior hot hatches. The concept version was shown at the 2011 Frankfurt motor show, and we’ve had an early drive of a prototype.

The prototype we drove was in the body of a normal Up three-door, but we’re promised that the production version – if it arrives – will be visually far closer to the look of the original concept car, with deeper front and rear bumpers and chunky 16-inch alloys.

The fatter front bumper isn’t just for show, either. It’s needed to accommodate the extra 50mm needed for the GT’s fatter radiator – it needs a far brawnier cooling system than the basic car. The turbocharged engine is based on the 1-litre three-cylinder unit from the boggo Up, but it’s far from being just a bolt-on kit with a reworked cylinder head, crankshafts and pistons.

Drive is delivered to the front wheels by a six-speed manual gearbox (the standard Up has only five ratios) chosen to be able to deal with the engine’s meatier 129lb ft of torque.

Other settings on the prototype hadn’t been finalised – it won’t be going on sale before 2013 – but it sits lower, has firmer springs and dampers and rode on winter-spec 185/55 R 15 Conti Wintercontacts.

Considering it's at least a year from production, it's a promising start. The standard Up comes in 60bhp and 75bhp flavours – and although the turbocharged engine’s peak 108bhp might sound relatively modest, it puts the GT into a different performance league.

On the road you don’t notice the blown engine’s power as much as its torque. We don’t have official figures, but it’s clear that most of the twist is available low down the rev range, giving the GT a low-rev enthusiasm that its naturally aspirated sisters don’t share. It likes to rev, too – with both a rorty exhaust note and a properly old-school induction roar that would probably be deemed a bit too extreme to make production.

With a kerbweight of only 960kg, performance is respectably rapid, and throttle response is impressively crisp considering the forced induction. It’s frugal, too – VW claims a production version would be able to manage over 60mpg.

The prototype’s chassis settings were described as being ‘about 80 percent’ there by a project engineer, and although the well-damped chassis rode out minor imperfections well, relatively soft springs also meant lots of cornering roll. The weighting of the electric power steering also felt a bit light considering the GT’s dynamic focus, although behind this the responses are keen enough. The ultimate handling balance is predictable understeer, although the Up was happy to tighten it’s line on a lifted throttle.

At the moment, the prototype doesn’t feel as raw or direct as the Lupo GTI, but there’s more than enough time before it makes production to tighten up the driving experience.

Presuming Volkswagen signs off production – which seems likely considering it was so keen to let grubby hacks into the prototype – then the Up GT looks set to find itself right in the thick of the junior hot hatch class, as a rival to the Suzuki Swift Sport, Mini Cooper and Renault Twingo Renaultsport. There’s no word on pricing yet, but the basic Up’s affordability means we reckon you’d be looking at less than £14,000 for the GT.

If the project gets green-lit then the turbocharged three-cylinder engine is likely to appear elsewhere within the VW family, initially in Seat and Skodas’ versions of the Up, but potentially also further up the range as a rival to Fiat’s two-cylinder turbocharged TwinAir.

The prototype is currently the daily driver of Ulrich Hackenberg, VW’s engineering boss – so it’s clear that he’s behind the project.