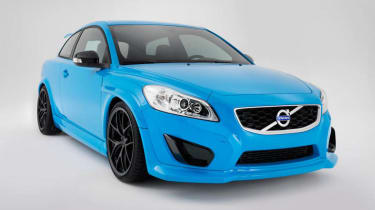 We’ve always liked the Volvo C30 hatchback, especially in 2.5-litre T5 form, but there’s always been a whiff of untapped potential about it. Until now. Teaming up with its performance and racing partner, Polestar, Volvo has created the C30 Polestar Performance Concept, an exercise based on the C30 that won the 2009 Swedish Touring Cars Championship (STCC).  This project is merely showing what could happen to the hatchback if engineers were liberated from racing regulations. The turbocharged, five-cylinder, 2.5-litre engine has been given a larger turbo and larger intercooler, with custom-built pistons, connecting rods and camshaft just for this project.  As a result, power is up from an unremarkable 227bhp to 405bhp, with a healthy 376lb ft of torque on offer. There are further changes underneath. Front-wheel drive becomes four, with the fitment of a Haldex all-wheel-drive system  with Quaife front and rear mechanical differentials to keep everything under control, combined with a set of six-piston calliper brakes from Brembo. As a finishing touch, Polestar has installed uprated shock absorbers and springs from Öhlins Racing, while Volvo has also given the C30 a quick-ratio steering rack. The C30 Polestar gets its first public airing at the Gothenburg Motor Show (April 22-25), though Volvo says there are no plans to bring the C30 Polestar into production. Maybe it’s time to get tickets to the STCC… Click here to read about evo’s Volvo C30 T5 long termer See the C30 take on BMW 123, VW Scirocco + Mazda RX-8