405bhp and 0-62mph in 4.6secs make this the fastest road legal car Volvo has ever produced. 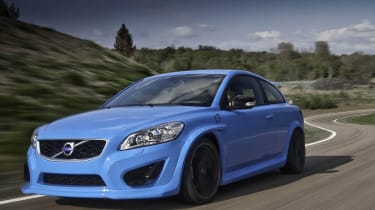 Another worthy but dull Volvo. Sorry, force of habit. It’s the sexiest thing to come out of Sweden since the female half of ABBA. Badged the C30 Performance Concept Prototype (PCP), this is the fastest road-legal car the firm has ever produced, hitting 62mph in just 4.6 seconds. It’s the work of Gothenburg company Polestar, which develops, builds and races a pair of stripped-out C30s in the Swedish Touring Car Championship. One of them won the series last season. The PCP’s stand-out styling includes a bodykit with double-decker rear spoiler, smoked 19-inch alloys and a unique Polestar Blue paint job.

An eyewatering 399bhp comes from the same 2.5-litre turbocharged five-cylinder petrol engine that’s in the Ford Focus RS. Needless to say, it’s been somewhat modified. There’s a larger intercooler plus upgraded pistons and con-rods. The suspension is all-new with Öhlins shock absorbers and springs, and stopping power is via six-piston Brembo 380mm discs at the front, and four-piston 330s at the back. Power is delivered to all four wheels via a six-speed manual transmission.

Like no other Volvo. Put bluntly, this is a road-going version of the C30 touring car so it’s pretty extreme. It means two things – some of the refinement you’d get on a regular C30 is missing, but it’s been engineered to be driven hard. Turn the key – what, no starter button? – and there’s a real animal growl from the PCP. Push the right pedal and it just takes off; it’s blisteringly quick and grip levels through the twisty bits are staggering. The chassis stays extremely flat, though you can feel the back end go light thanks to the powerful front Brembos. The straight-through exhaust means cabin noise is high, and at certain revs, ear-splittingly so.

With what exactly? Volume brand C-segment family hatchbacks pumping out 400+bhp are a little thin on the ground. The closest rival would be Ford’s recently announced Focus RS500 with 345bhp through the front wheels. Beyond that, you’re into premium-badged sports car territory.

Interestingly, the PCP started off with even more extreme styling, but was toned down so its C30 heritage was clearly visible. Polestar claims that over a 1km race circuit, the PCP is six seconds quicker than a Mitsubishi Evo X.

There’s no details on its mpg or emissions, probably because the numbers would scare small children. Polestar bosses reckon they would sell 200 units a year, but unfortunately, while Volvo bosses are said to have made lots of positive noises about the PCP, this car is never likely to see production. Shame. It would give Volvo’s image a kick in the right direction.