Our C30 continues to effortlessly clock up the miles, although a service is now on the cards 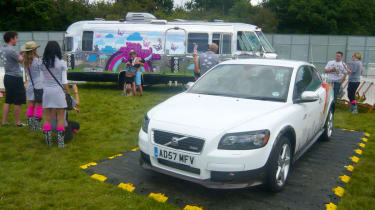 If your C30 has five cylinders then its first service is due at 18,000 miles. I got it wrong, which is why I was at my local Volvo dealer, Marshall of Peterborough, a few thousand miles early. Doh! There was another surprise too when they told me that they had at least attended to the recall. What recall? Apparently the driver’s floor mat was 20mm too long and the extra length could have led to a conflict with the accelerator pedal. It’s only a problem on certain C30s in ‘R-Design’ trim, but if you’ve got one it might be worth giving your dealer a call to see if you’re due a replacement mat.

Walking away from Marshall’s reception, my head hung low with embarrassment, I couldn’t believe my eyes when I looked up and saw our C30. Although I hadn’t even opened my wallet, the car had been thoroughly cleaned both inside and out. That’s what I call first-class service.

Talking of shiny Volvos, if you went to a music festival this summer there’s a good chance you may have spotted one or two parked incongruously in a muddy field. You see, the latest move in Volvo’s ongoing campaign to appeal to younger drivers was for the C30 to be named the official car of the Hard Rock Calling, O2 Wireless, V and T In The Park festivals. Very cunning.

Life hasn’t been so easy for our T5 version, though. In fact it’s been racking up the miles recently. It appeared in a group test in issue 122 and also transported photographer Stuart Collins to Wales for our Caparo T1 drive last month. Its first service can’t come soon enough now, though, because, as Ollie said in the group test, its brakes have really ‘gone off’ and are in need of some attention.

Finally this month, you may recall that I asked what the hook at the bottom of each of the C30’s front seats is for, as all it seems to do is drag the seat belt across the path of those trying to get to the rear seats. Well, reader Matthew Heywood has e-mailed to say that its there so that those sat up front don’t have to reach too far back to grab their seat belts. A nice thought, Volvo, but it’s not needed. I have arms and can also use the flexibility in my body to turn around slightly, thank you