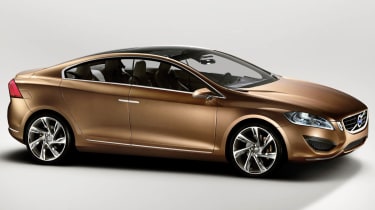 Volvo has revealed pictures of its S60 saloon concept. The car which will appear at the January 2009 Detroit motor show and give major hints as to what to expect from the 2010 S60, which is only the second version of the saloon - the outgoing car will be a decade old by the time it is superceded.

It has remained on sale virtually unchanged thanks to its well proportioned looks but also due to Volvo pushing funds towards developing a more expansive range - including a new S40, V70, the C30 hatchback/coupe and the all-new XC60 SUV. The bigger XC90 will also be over ten years old by the time it is replaced as the brand concentrates on developing the new S60.

If it looks anything like this concept, Volvo will be onto a winner. Although the suicide rear doors are destined to be lost, the four-door coupe looks, in the same vein as the VW Passat CC, would be sure to stand out alongside more traditional saloon rivals such as the BMW 3-series and Audi A4. The lines that sweep from the headlights to the back of the car are inspired by Swedish coastlines, apparently, while Volvo says the car will deliver a sporty drive like no other Volvo before. Fingers crossed...