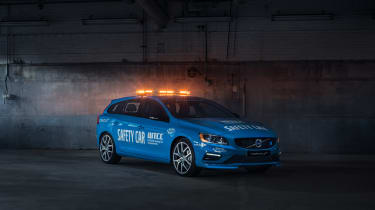 Safety is synonymous with Volvo. So a Volvo V60 Polestar, complete with flashing light bar, is the perfect safety car, surely? With 346bhp and 369lb ft of torque the Polestar version of the Volvo V60 will have enough performance to set a decent pace for the current crop of World Touring cars to follow. It’s fancy Öhlins dampers will undoubtedly help too. The V60 Polestar Saftey Car makes its debut at the first race of the season, held this weekend at Circuit Paul Ricard in France.

The V60 Polestar will be the safety car for the entire 2016 WTCC season. Safety requirements set by the FIA and WTCC mean that the V60 will need to be equipped with rescue equipment and a roll cage. Unfortuneately the roll cage isn’t visible in the current official pictures.

Sadly the V60 Polestar Saftey Car doesn’t seem to get any performance upgrades. Unlike BMW’s M4 safety car, which previewed the water injection system now found in the GTS, Volvo haven’t chosen to use this platform to present any new technology. 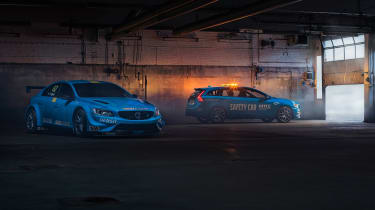 This weekend will also be first outing of the new Volvo S60 touring car too. Volvo have been involved in WTCC, albeit infrequently, since 2007. The new S60 however, will be part of proper assault on the 2016 championship. The Volvo will be run by Polestar Cyan Racing who also been prepare the Garry Rogers Motorsport cars for the V8 Supercars Championship. Although Volvo hasn’t been one of the dominant teams in V8 Supercars, there has been some real quality racing from the team.