BMW has revealed the first pictures and details of a new M4 safety car, which will take part in this year’s DTM season 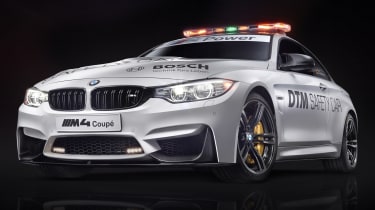 It has been announced that the BMW M4 coupe will be this year’s DTM safety car, replacing the Mercedes C63 AMG Black Series that was used in the series during 2013.

As you might expect, the model has received a number of additional parts to ensure it can perform its track duties safely. The major modifications include a roll cage, and Recaro racing seats with full harnesses, as well as the safety lights that are mounted to the roof.

A number of M Performance parts have been added to the basic M4, including lots of carbon fibre, on the front splitter, mirror caps, rear spoiler and the rear diffuser. KW suspension is fitted, and there is also a titanium exhaust.

The car retains the same 3.0-litre turbocharged engine as the road car, which produces 423bhp and 369lb ft of torque. BMW has opted for the dual-clutch transmission instead of the manual 'box.

‘Having decided to start the 2014 DTM season with a new challenger, in the form of the BMW M4 DTM, it was a logical step to have BMW M GmbH put together a BMW M4 Coupé DTM Safety Car,’ said BMW Motorsport Director Jens Marquardt. ‘To lead the DTM field out in style, the safety car itself must also be extremely sporty. The BMW M4 Coupé certainly provided us with the basis to achieve this.’