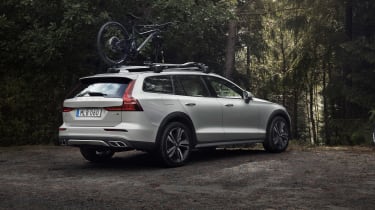 It’s not a new idea, the Volvo V60 Cross Country. The Swedes have been gluing plastic wheelarch extensions onto their estates for over 20 years, yet they still remain a niche that appeals over laborious SUVs. It comes as no surprise then that the already desirable, attractive and well-made V60 would wear its Cross Country overhaul extremely well, joining the V90 and V40 Cross Countries as Volvo’s ‘thinking person’s’ SUV alternatives.

To justify its rugged cladding, the V60 has been raised by 75mm over the standard V60, along the way picking up a suite of off-road driver assists like hill descent control and standard all-wheel drive with a dedicated off-road mode. The bumpers have only been subtly changed over the standard V60, with slim silver bash plates, more grey plastic trim and a fresh wheel design.

> Click here for our review of the standard Volvo V60

Powering the V60 Cross Country in the UK will be the well-proven 187bhp 2-litre D4 diesel, connected exclusively to an eight-speed torque-converter automatic gearbox. Volvo has stated that plug-in and mild-hybrid models will follow, but hasn’t announced any specifics or dates about their release.

The standard V60’s sophisticated interior has also remained largely unaltered, with just the finest of detail changes. These include new coloured stitching across the dash top, different timber trim inlay and subtle leather broguing around the seat edges.

We expect the V60 Cross Country to be filling in the gaps between premium SUVs in the Waitrose car park later this year, with plug-in hybrid models to follow later in 2019.