Volvo unveils its XC60 Plug-in Hybrid, a 345bhp SUV that's as fast as a hot hatch and tops 100mpg 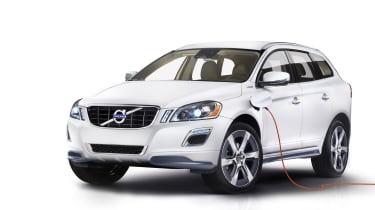 Volvo has pulled the wraps off its new XC60 Plug-in Hybrid concept. While an environmentally friendly SUV might not be prime evo territory, this XC60 mixes a 276bhp/280lb ft four-cylinder turbo petrol engine with 69bhp/148lb ft of electric power. The resulting 345bhp total would make this the pokiest car in Volvo’s line-up, and one capable of hitting 60mph in a hot hatch-beating 5.8sec. It combines a muscular power figure with, according to the European combined cycle, at least, 100mpg fuel economy and 53g/km CO2 emissions. On electric power alone, the XC60 can travel 28 miles, while as a hybrid it can go 600 miles without refuelling. In its North American target market, more than half of drivers travel less than 30 miles a day, making zero emissions travel entirely possible. The XC60’s US audience is the reason for a high-power petrol engine rather than a more frugal diesel.  An oil-burning Volvo V60 Plug-In Hybrid launches in Europe late this year, using a 212bhp diesel engine and similar hybrid tech (and the same 69bhp motor) to this XC60 concept. This includes three driving modes – electric-only ‘Pure’, engine-only ‘Power’, and a ‘Hybrid’ combination – and selectable, electrical four-wheel drive instead of a less economical permanent mechanical system. The Volvo XC60 Plug-In Hybrid will be revealed at next week’s 2012 Detroit motor show, with prices and on-sale dates yet to be confirmed, while V60 sales begin this year, prices starting at £45,000.