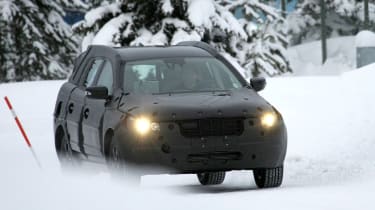 We’ve seen the XC60 Concept last year, but this is definitely different. It appears to be an early prototype of the production version and was caught in Northern Sweden undergoing cold-climate testing on a frozen lake. Running under the codename of Y278, the new XC60 is expected to hit the showroom floor in early 2009 as a 2010 model.

The XC60 is expected to share the platform with the Land Rover Freelander, and utilize the same DOHC 3.2-litre in-line six-cylinder.

Assuming the engine's Volvo tune will match Land Rover's application, that will mean 230 horsepower at 6,300 rpm. The XC60 is expected to be offered in front- and all-wheel-drive.