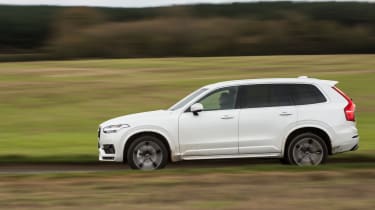 Volvo’s aim when building this second-generation XC90 – which was 13 years in the making – was to tempt people out of typical German SUVs, such as the Audi Q7, Mercedes-Benz GL and BMW X5; maybe it secretly hoped a few Porsche Cayenne owners might migrate to the brand too.

For the most part it has worked, the XC90 is more than a match for rivals when it comes to quality and refinement. Where it falls down is in terms of driving dynamics, with the likes of the Cayenne easily providing a more exciting steer.

The interior quality is a particular highlight and is more than a match for Range Rovers that cost 50 percent more. It's a lovely place to sit, with innovative technology and unusual material choices that ensure things feel premium but different. The XC90 is a welcome change from some of the more predictable luxury SUV interiors currently available.

The XC90 might just be Volvo's greatest creation to date. On the one hand, it can provide a genuinely upmarket and luxurious driving experience, on the other it offers up extremely high levels of safety and technological innovation. It might not be hugely exciting to drive, but it sticks with the best when it comes to luxury SUVs.

The T6 is to be avoided. It's not bad by any means, but the T8 instead offers far more punch and better parsimony in the petrol range. It is however the D5 that is the car to go for when it comes to driveability, thanks in part to more accessible torque and as a bonus, it costs £3450 less to spec. The T6 does clearly have some performance potential however so it's entirely possible we see Polestar turning its hand to it in order to create a hotter XC90.

The Volvo XC90 is not a car to satiate your need for driving thrills, but it almost seems petty to mark it down for this because it so perfectly meets Volvo's own brief for such a car. What it lacks in feedback and entertainment it wholly makes up for in comfort, refinement and sophistication.

To that end, the XC90 could be considered the perfect foil to something sportier - a large, safe, luxurious family vehicle, sharing garage space with something lighter, leaner, more entertaining. The XC90 does large, safe and luxurious like few other cars we've driven.

If that's your aim, we'd consider eschewing the range-topping T8 Twin Engine model, with its turbocharging, supercharging and hybrid assistance, and opting for the cheaper but admirably frugal D5. The diesel doesn’t have to lug around an electric motor and attendant lithium-ion battery pack, so it's a great deal lighter lighter and proves 90 per cent as quick along routes that are twisty more often than they’re straight.

Those who are after something with sportier looks might consider the just announced XC90 R-Design. It includes leather sports seats, a sport steering wheel, shift paddles, tinted windows and different drive mode settings.

Performance and 0-60mph time > The T8 Twin Engine petrol electric hybrid is the highlight, delivering a 0-60mph time of less than six seconds. Performance is strong across the range, with even the D5 managing 60mph in 7.8 seconds. Read more about the XC90's performance here

Engine and gearbox > Every engine in the XC90 is a four-cylinder, and use a variety of both turbocharging and supercharging to boost performance. The T8 petrol electric hybrid produces and impressive 395bhp. Read about the XC90's engine and gearbox here

Ride and handling >  'Relaxed Confidence' is the driving experience Volvo aimed for with the XC90. That is, it's not hugely thrilling but does deliver a truly exemplary ride. Read about the XC90's ride and handling here

MPG and running cost > Economy figures are hugely impressive for a 2343Kg SUV. Volvo quotes the T8 TE as being capable of achieving 112.9 MPG. Read about running and XC90 here

Interior and tech >  The new benchmark for mainstream cabin quality. Space is ample, even with all seven seats in use. Technology is right up there with the best, with the XC90 using Apple CarPlay for smartphone connectivity. Read about the XC90's interior and tech here