Abarth has revealed yet another special-edition 695, this time with a race-inspired adjustable spoiler 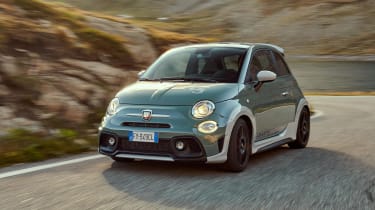 As you might have noticed over the years, Abarth is no stranger to special editions. With its 70th year upon us, 2019 has been host to an array of limited-run variants of both the 124 and 595/695 ranges, but the most impressive of them all seems to have been left until last.

Unveiled at the brand’s 2019 owner’s meeting in Milan, the 695 70th Anniversary celebrates 70 years since the company was founded by Carlo Abarth in 1949. Fittingly, production of the race-inspired supermini will be limited to 1949 units.

Though the ‘Monza 1958’ launch livery – a tribute to the first Abarth 500 that set six international records at Monza – won’t please some, this special edition is far from a slapdash job. Specific to this model is what Abarth has coined the ‘Spoiler ad Assetto Variabile’ – an adjustable rear spoiler, to you and me – harking back to the marque’s days of manually adjustable spoilers on its track-only machines. There are 12 settings to choose from, changing the angle of attack from zero to 60 degrees, the latter providing a not-insignificant 42kg of downforce at 124mph. Development took place in Italy’s only full-scale wind tunnel, just south of Turin.

If you’re not much of a fan of the green on grey scheme of the launch car, four other more palatable colours are available to choose from – Circuit Grey, Gara White, Scorpione Black and Podium Blue. Sabelt ‘Tricolore’ seats are also exclusive to this model, as are numbered plaques to denote which of the 1949 cars you’re in, heritage 70th anniversary badges and Biposto-esque wide arches. 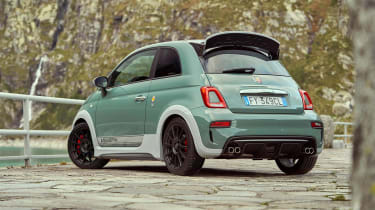 The model features the same powertrain as the range-topping 595 Competizione, producing 177bhp and 184lb ft of torque from a 1.4-litre turbocharged four-cylinder, providing a 6.7sec 0-62mph time and 139mph top speed (124mph with spoiler at full attack). Supersport wheels of the 17-inch variety, four-piston Brembo brakes, the brand’s hilariously noisy Record Monza exhaust system and a limited-slip differential all come as standard.

You might think all of that equipment is rather generous, but a glance at its £29,695 price tag quickly extinguishes that thought. Order books open later this month, with cars hitting UK showrooms towards the end of the year. 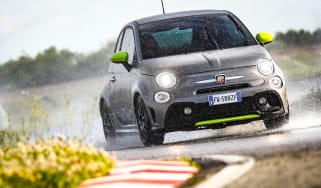