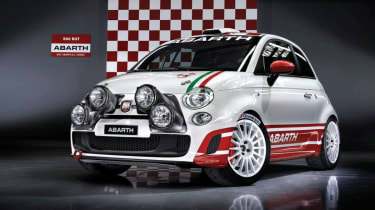 Abarth has revealed its Fiat 500-based rally car. This is the Abarth 500 R3T, and it will star in a one-make series (as well as potentially appearing in other rallies) from next year.

It comes type approved for Group R3T (hence the name), a class that covers turbocharged cars with an engine that’s 1.6-litre or smaller. In fact, it takes its engine from the regular, road-going Abarth 500. That means a 1.4-litre, but the R3T benefits from the fitment of a Garret fixed geometry turbocharger that boosts power to 178bhp – 20bhp more than the highest powered official 500, the Esseesse.

The engine comes mated to a sequential six-speed transmission, with a twin-plate clutch and self-locking differential. Smart 17in OZ alloys shroud Brembo disc brakes with four-pot calipers. The suspension is highly adjustable, with racing shock absorbers and tweakable ground clearance and caster/camber angles. The idea is to make a car that can be ideally suited to each of its drivers’ individual driving styles.

The drivers in question are intended to be private racers, and young ones at that – those who want to prove themselves in a bona fide racing car. Group R3T is ideal for balancing pretty potent power with more attainable running costs, and it’s a class that’s predicted to have a bright future. It has a 1080kg minimum weight figure, which the Abarth hits perfectly, meaning it boasts 167bhp/ton.

It gets a typically Italian livery, and integrates itself perfectly into the current Abarth range with stripes aplenty. The promotional trophy it stars in follows years of tradition, featuring an eclectic mix of racing Fiats past – from the Uno Turbo to the titchy Cinquecento and rather unloved Stilo.

A full timetable of the Abarth 500 R3T’s trophy with be released in the coming weeks. If it’s not quite your cup of tea though, fear not – Renaultsport offers up the Clio R3 if you fancy honing your rallying skills in something a bit more French.