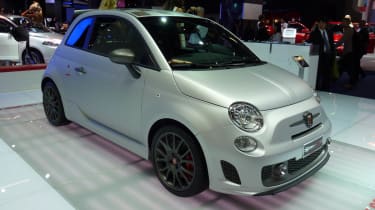 The 695 Competizione intrigues us most. It’s described as Abarth’s first street legal racing car, and as such boasts styling inspired by the 500 Assetto Corsa racer. There’s just the two seats inside (a roll bar replacing the rears) and they’re black leather Sabelts with red detailing and carbonfibre shells.

Power comes courtesy of a 178bhp/184lb ft 1.4-litre turbo petrol engine which is mated to a five-speed electromechanical gearbox. It’s complemented by steering-wheel paddles and your choice of ‘Street’ (auto) and ‘Track’ (manual) modes. There are suspension tweaks (Koni shocks) and bigger brakes (305mm front, 240mm rear) while the exhaust gets a ‘Record Monza’ variable back pressure dual mode; in layman’s terms its freer and louder above 3000rpm. Top speed is 140mph while 0-62mph takes sub-7sec.

The Punto SuperSport gets the same engine, though boasting 199lb ft of torque and a six-speed manual gearbox. Being heftier than the 695, it takes half a second longer to reach 62mph and its top speed is 134mph. There’s two-tone paintwork with matt black detailing on the exterior and lashings of leather with red and yellow stitching inside. Like the 695 Competizione, the Punto SuperSport gets Koni shock absorbers and upgraded brakes.

Abarth’s 500 Cabrio Italia is designed to celebrate 150 years of Italian unity and boasts ‘Blu Abu Dhabi’ paint. Boasting the 500 Esseesse’s 158bhp/170lb ft 1.4-litre turbo engine and a five-speed manual gearbox, it hits 62mph in 7.4sec and a 131mph top speed. Like its fellow Frankfurt debutants, it boasts Sabelt front seats, but the emphasis errs more towards luxury than trackday friendliness.

Three new models is a sure sign of success, and since its 2008 launch Abarth has sold 36,000 cars, a quarter of which have been upgraded by optional power kits.