At just 1.2 miles long the Indy circuit may not be long and yet its mix of corners require both nerve and technique 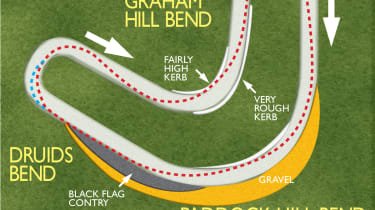 Paddock Hill Bend        The main problem with Paddock is that its crest makes it blind on approach and as always that invites you to brake too early, although exactly where will still depend on what you’re driving. It also depends on how fast you are going when you get there but if you can get to the top of the rise before treading the pedal, suddenly it all feels much more comfortable. It still may not be possible, so don’t try it too soon... In the first case though, you should still try and brake in a straight line – almost away from the turn – where you still won’t be able to see the apex. That much is an important detail because once again the temptation is to aim for one that is visible and this will be too early. You will definitely understeer wide as you start to pile down the hill and end up running over the kerb and on to the dirty bit to the left.      Be patient and aim for an apex just out of sight to the right, then drive the car towards it. A little practice and you’ll find you can keep your foot hard in it while first the apex comes sweeping towards you, followed by the exit kerb - which you can just rub with the two outside wheels and listen to the satisfying rasp from the ripples in the concrete. That also says you are using all the circuit, but not the part beyond.                 Druids Bend The classic line at Druids is to brake in a straight line while staying right over to the left then start the turn as late as the circuit will allow before aiming at a point about three quarters of the way round the corner. Then you squeeze on the power to pour you down the hill. In theory this allows the car to drive in the straightest line possible for the longest time and this technique may still be best in something powerful and rear drive – and – when you’re on your own. Leave a gap on the right and some opportunist will surely use you as a brake then run you wide over the kerb on the exit.

You also have the added problem of another crest on the way in so if you try and leave your braking too late, you risk the car going light, locking up and flying into the gravel. The alternative is to head diagonally across the road almost as soon as you are under the bridge, then mash the brakes almost in a straight line as you head for an apex just before the halfway point round the turn. That helps load up the front and reduce the understeer, after which you have to hassle the car and give it as much power as it will take until the corner opens out. There is no obvious answer to Druids, just a set of guidelines to use as a starting point.

Graham Hill BendOver to the right as soon and as smoothly as possible, negotiate the slight kink on the downslope, then brake. Graham Hill Bend is one of those corners where if you can get the car turned slightly early and loaded up by the middle, the outside wheels weight up and grip harder and help you carry extra speed towards the exit, while the inside ones float over the kerb.

If you attempt this technique without the required degree of confidence – or don’t manage it effectively - though, the car will run wide and bounce over the exit kerbs – which are nastily high to deter this kind of thing so best compromise in the first instance is to brake slightly earlier and aim for an apex a little further round, then drive the car all the way through. You can work up to the weight transfer method a little later. Being on the power is most important here because it’s quite a long way to Surtees.

Surtees, McLaren and ClearwaysOne of these corners is not named after a famous racing driver but as a trio they pave the way for a critical part of the track which is the long run up to Paddock. The most important part of the sequence is Clearways and that’s what you need to focus on, even if it means compromising one part for another. Nevertheless a lot of people still make the mistake of making a late entry into Surtees and shedding a lot more speed than they need. This is an early turn where you aim to put both left hand wheels onto the shallow outer part of the kerb – and preferably not the rougher inside part – or not until you know whether your car will cope with it. This can so easily launch the car and hop you wide on to the grass opposite, setting you up for a spin into the barriers on the left.

The converse is to aim too early and then find yourself running out of road while the road is still bending left, so somewhere in between is the optimum and you can straighten this a lot with judicious use of the kerb. To help you, the circuit’s management have thoughtfully made the part nearest the track a gentle affair. Anything I’ve ever driven will cope with this and it really is essential for a quick lap because it straightens the road for the gentle right hander at McLaren. Here is where you make the real compromise; you don’t turn, so much as ease right on the exit of Surtees then brake in a straight line aiming at a point 90 degrees or even more away from the track you are about to occupy to the right. How far over to the left and away from the turn depends on the amount of grip you have available – more grip means you can hold it tighter – but in most road-tyred cars, turning less at McLaren and opening out the entry to Clearways is a good thing to do.

Turn right for the first part of Clearways with the car settled, aiming to apex just beyond the piece of tarmac which forms the point where the Grand Prix circuit joins. At first this will seem far too soon but be patient…

You do it early because the track soon opens out so generously to the left where you can let the car run wide and use the available road, which incidentally also falls away. Just relax on the wheel and don’t be tempted to hold the car to the right which is what most people do. Let it run all the way to the left in a big gentle arc until you just clip the kerb on the outside, after which you keep the steering where it is for a couple of moments longer. The main point is that opening up the line also allows you to keep the power on hard for a very long time which is something a lot of people forget to do, even if they remember to use all the road.