Lincolnshire's Cadwell Park is one of Britain’s oldest circuits 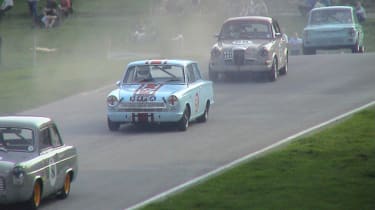 Not many people realise, but Cadwell Park is one of Britain’s oldest circuits. In 1934, a farmer by the name of Wilkinson laid down a three-quarter mile chalk track on the land adjoining his farm near Louth in Lincolnshire and used it to race motorbikes. In 1952 it was given a hard surface and extended to one and a quarter miles, then lengthened again to its present 2.2mile dimension in 1961. But while it may have grown in length it never really grew in width and essentially it remains more suitable for bikes for this reason. Nevertheless cars of all sizes have been raced there for many years and until 1984 the International Formula 3 circus made an annual visit – and until Barn Corner up at the top of the track was moved a few metres to provide a bit more run off area, the outright lap record for the long track was held by Enrique Mansilla’s Ralt RT1. Previous to that, it was a Formula Two Chevron driven by Tony Dean, father of current GT racer Richard. These days, and as proof of how things have moved on, it’s held by a Radical SR8 driven by Shaun Balfe.

In 1987 Brands Hatch Leisure bought the place which at the time was good news because it provided some much needed investment for infrastructure like paddock facilities, a scrutineering bay with a watertight roof and a café and bar. This last is significant because the Wilkinson family who had owned the track since its inception were strict Quakers and no alcohol was permitted anywhere near. Even better news is that ownership is now in the hands of Palmer’s Motor Sport Vision, which has applied its now familiar brand of detail attention to good effect. There are plans to widen the circuit – which I’m not exactly sure about – but for the moment it is definitely still a wonderful place to drive, and like Brands Grand Prix, Oulton Park and Spa, the prospect of another lap is always a challenge and a pleasure in equal amounts. The reason is the same; all the tracks mentioned are built on hilly ground.

Unlike airfield circuits where every tour is a technical exercise, a hill adds that extra dimension – in some case because the crest hides an apex, in others because the gradient or the hump over the summit does surprising things to the car’s handling. Each is always exhilarating. It also provides extra opportunities to outbrake yourself – of which more later – and the odd challenge in simply getting there. The hill on the A153 between Horncastle and Cadwell is preceded by a tight left - right corner between some big trees which means you can’t take a run at the gradient. Many is the ancient overloaded van and trailer that has made it halfway up only to grind to a halt in a fog of oil and water smoke. I’ve been there too, so next time someone says Lincolnshire is uniformly flat, just point them towards Cadwell.

But if Cadwell is a wonderful place to drive, in a car it is a less good place to race because a narrow track leaves few opportunities to overtake. Having claimed the pole for a TVR Tuscan contest, I then created a gnat’s too much wheelspin and spent the rest of the afternoon staring at the back of a TVR whose driver didn’t happen to make a mistake. Short of pushing him off, there was nothing else to be done.

The hilly situation creates a few minor difficulties in logistics as well. The paddock is in three tiers and the route down to the track is a steep drop through the woods, just perfect for taking the front splitter off your wonder GT. Then you enter the circuit in the middle with another long drop down to the start-finish and the pit lane. Either you hump your tools down the steep slope and work there, or you do what most people do and peel off at the top of The Mountain, scale your way back to the paddock and make the adjustment, then go back through the woods to rejoin. It’s a mighty pain if you’re at the bottom and you’ve forgotten the metric adjustable essential for tweaking the front anti-roll bar.     In addition to providing the fabric for a more exciting circuit, the Lincolnshire Wolds is a pleasant place to be. Much like the rolling hills of the West country but without the crowds there are some wonderful uncluttered roads, some gentle scenery and unspoilt towns. For those who like the latter, the nearby market towns of Horncastle and Louth are worth a visit while the city of Lincoln and its cathedral is in similar style but on a larger scale.

Alternatively if bright signs, an unlimited supply of lager and wall to wall fruit machines are your bag, then the coastal resorts of Skegness and Mablethorpe are also within easy reach. Accommodation everywhere is plentiful and cheap and is usually available, but amenities that you might take for granted like 24 hour supplies of petrol, tyre fitting and engineering services, are slightly less common. Better not to create the need for the latter and remember to bring a few cans. We’re talking about petrol here, not the fizzy brown stuff that makes your head-ache.