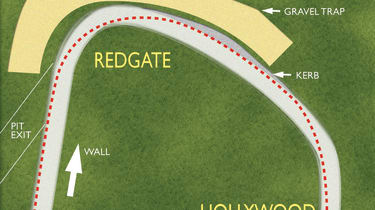 RedgateThe first corner is tighter than it first appears, turning through more than 90 degrees. The approach requires firm braking as you will be carrying good speed along the start/finish straight and the pitlane exit on the left-hand side can be used as a good guide for your braking point. The turn-in point is late, you begin to turn only just before the track itself curves right and you are aiming for an apex point at least three quarters of the way along the inside kerbing. For front-wheel drive cars it ma help to run along this curb until it ends. There is some run-off at the exit but the grass tends to be very rutted due to the amount of people who misjudge this very technical turn and run out of road…

HollywoodThe gentle right-hander that follows Redgate should be used to position the car on the correct part of track for the critical Carner Curves, which follows almost immediately. You should be in the middle of the track here, gradually bringing the car over the right in preparation for the next left.

Craner CurvesThis is the archetypal rollercoaster corner, it falls steeply downhill, it’s very fast, speed builds rapidly and even the most experienced drivers take a deep breath every lap. Just before the track sweeps around to the left there is a very short straight section of track and if you have the line correct through Hollywood you should be on the far right here. If you need to brake or lift you should do only do it here, the car will be unsettled if you back off through the next part, probably resulting in a massive spin and possibly a trip to the large gravel traps that are waiting to grab you.

Again, turn left as the circuit begins to curve and be aware that the car will go light as it crosses the crest, and because of this the rate of steering should be slow, be gentle with all the controls at this point. You do not need to use all of the road on the exit because you need the car back on the left in preparation for The Old Hairpin

The Old HairpinIgnore the name, it’s not a hairpin, in fact it’s a quick corner taken in fourth gear in most cars. However some firm slowing will be required as the approach is so fast. Brake alongside the kerbing on the left and turn in as you reach the end of it, and aim for the obvious apex. There is plenty of room at the exit and it’s common for trackday drivers to not use all the available tarmac here. If the car isn’t running right out of the edge of the track then you can carry more speed through here. This corner is crucial because the next section climbs steeply uphill.

McLeansFollow a natural line under Starkeys bridge and keep over to the right as you climb towards McLeans. The approach is complicated by the left-hand Schwantz Curve that makes braking awkward, you should not need to brake for Schwantz itself but a lift might be required just to settle the car into the corner. Turn left across the track and then once the car is straight you can apply the brakes hard as the uphill nature of the track will aid retardation. This is generally a third gear corner and you should apex three quarters of the way along the inside kerb, do not run over this kerb as it upsets the balance. The corner is effectively blind as you are reaching the top of the climb and it’s not uncommon to see drivers running wide here having turned-in too early.

CoppiceDue to the short rise on the approach the apex is out of sight until you reach the turning-in point. Brake on the rise and turn-in as soon you see the blue and white apex stones appear on your right. Once you reach the apex keep the steering angle constant, this is a long curve but it does not have a double apex. If you keep the steering angle the same it will bring you out to a natural exit on the left. Exit speed is important due to the long straight that follows.

The EssesThe approach is through the new, emerging Formula One pits and the Esses is the corner that will cease to exist after this winter. Use the GP circuit on the left as a braking marker and be aware the track slopes downhill as you begin braking before climbing slightly at the end. The aim with this sequence is to carry as much speed as possible onto the start/finish straight, so it’s worth sacrificing some mid-corner speed to open out the final part as much as possible. You can use the exit kerbs, but don’t go further, there are walls close by on either side, so mistakes can be expensive.