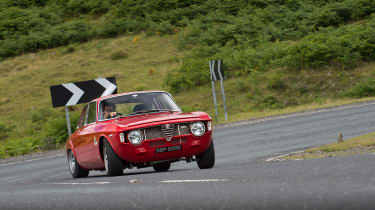 If all this sounds a little too new, the smell of leather and wool mixed in with a faint whiff of petrol soon transports you back to a different age. The patina of the dials and switches combined with the Italian scripts declaring ‘GIRI x100’ on the Veglia rev-counter, or ventil, aperto, chiuso on the heater controls, also transports you to somewhere entirely more glamorous.

After a few minutes drinking it all in I pull the carbon door shut. Then I have to open it again and shut it properly because it’s so light that only a slam will do. The engine starts easily on the key and the competition clutch and lightweight flywheel don’t combine as aggressively as I’d feared, so it’s easy to get moving. Manoeuvring at low speed is a doddle too, because the car has a speed-sensitive electric power-steering system that gives your forearms just enough assistance in a car park but then basically disappears once you’re up and running. This leaves you to enjoy one of the main reasons for buying one of these new-old cars: steering feel.

The weighting and tactility from the small wheel is everything we crave in modern cars but so rarely find. In fact, when you start to listen, it’s not just the wheel but the whole car that is talking. The seat is reclined a fraction and the pedals seem to lean forwards to meet your feet but it all feels perfect to me. Changing gear is curious at first because you have this very precise, small action being controlled at a distance by a very long, slightly vague lever, yet it is quick and satisfying once you’re acclimatised.

There is a temptation to look at the little Alfa and think it must be fragile and will need to be treated with kid gloves, but the GTA-R begs to be driven quickly and revved hard from the moment you get into it. Within a few minutes you’re reminded of just what a wonderful soundtrack a good naturally aspirated four-cylinder can provide. Gruff and rough, it has a terrifically hard bark that makes it sound fabulously aggressive. It’s fast too, with a bridge-to-gantry time around the Nordschleife of close to eight minutes. 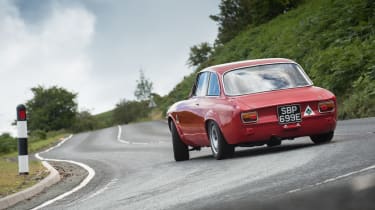 I was worried that the Yokohama Neova AD08 tyres might be too sticky and rob the flyweight Alfa of some adjustability, but not a bit of it. Through a particularly good sequence of bends it dances between direction changes, light on its feet. The suspension is relatively firm and down the bumpier stretches of Welsh blacktop you can still occasionally feel the vertical limits of the back axle, but this never seems to hamper progress. The advantage of the firm suspension setup is that there’s relatively little roll, so where you would expect a car of this vintage to lean and get vague, the Alfa is perfectly supported on its two-way adjustable dampers. This means that it allows you to play with it accurately and confidently, revelling in the beautifully balanced handling, working both ends up to and then over their limits.

The combination of feedback, smells, sound, quality and the sheer playfulness of this car is something really magical. I can imagine driving one every day and enjoying it wherever I went, rarely wanting for anything more.

Alfaholics is a great name and whoever thought of it must have been chuffed to bits. But there is a sinister undertone. You only really discover this darker side once you’ve driven one of the company’s products, but it is very real. I speak from experience here, because after just one day’s exposure to this car I found myself craving more. In the days and weeks after I drove it I lost hours looking at old 105-series Alfas on the internet – sometimes in the middle of the night. I kept replaying that glorious drive in my head, thinking about the sweet oversteer and longing for more, wondering where I could get some money to feed this desire. After a while I had to admit that after just one taste of an Alfaholics product I might be addicted.