Alfa Romeo 4C Coupe and Spider review - it may look like a miniature supercar, but does it drive like one? - Interior and tech

The interior is full of contradictions. The carbon fibre chassis is kept bare except for a few bits of carpet in the foot wells and an aluminum kick-plate for the passenger. The driver gets an exposed pedal box and an aluminum footrest. It’s sparse, hardcore and has a real racecar feel; everything seems functional, only the aluminum components show any sign of being designed.

Going up, the leather seats start to add a bit of luxury. They’re trimmed nicely and they are set really low. However, there isn’t much lateral support and base doesn’t stretch very far forward, leaving your legs unsupported too. The premium feel continues with thick leather door pulls, a leather trimmed centre storage unit that’s closed with a natty metal buckle. If you opt for the Spider, the roof is secured with metal clasps that look great and are wonderfully satisfying to use. 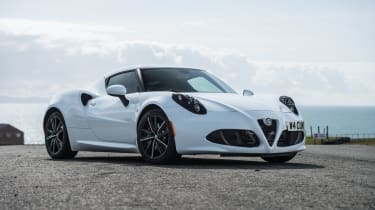 The no nonsense road racer attitude combined with high quality, luxury touches is an appealing contrast, reminiscent of an old 60s Ferrari built for GT racing. Sadly the level of quality plummets for the rest of the interior. The DNA switch, which controls the Alfa’s different chassis and gearbox modes, is just a generic Alfa switch that looks like it’s been abandoned on the centre console. The buttons to select drive, reverse and neutral are non-descript black plastic items. While the heater controls look and feel like they’re straight from the budget Fiat parts bin.

Then you get to the driver’s controls. The digital dash, which is neatly made up of one screen that incudes the speedo, rev counter and everything else you might need, looks terrible. The graphics would be more at home in a cheap, early 00s, racing game than in a £55,000 sports car.

Now finally, the steering wheel. The twin spoke design, might not be to everyone’s tastes to look at but what it does is create two very large spokes right where your hands go. Combined with the thick rim, it makes holding the wheel in a position where you can reach the paddles really awkward.

Just like much of the 4C, the interior gets a lot right but is dragged down by simple oversights and poor attention to detail.