Alfa Romeo 4C Coupe and Spider review - it may look like a miniature supercar, but does it drive like one? - MPG and running costs 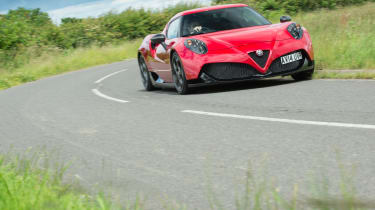 One of the many benefits of a light car is that they’re more affordable to run. With both the Coupe and Spider weighing in at less than a ton, they shouldn’t rack up huge bills when it comes to their consumable items. Tyres and brakes should last well, unless driven hard a lot.

Fuel consumption should be similarly impressive. The official figures are 41.5mpg around town and 56.5mpg on the motorway. Don’t, however, expect to the 4C to be that efficient in real life, especially if you wish to use any of its performance. Anticipate to average about 30mpg. That may be somewhat away from the claimed figures, but it’s still impressive for a sportscar with this pace.

One of the benefits of the Alfa’s more conventional 4-cylinder engine is that all of the UK Alfa dealerships will be equipped to service the 4C. So despite being a significant departure from the rest of the Alfa range, getting your 4C looked after won’t be a problem.