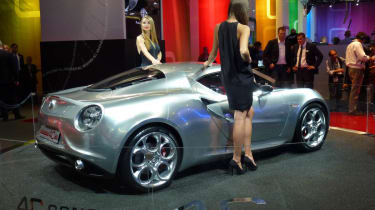 The tech spec hasn’t changed, so it’s still a taut, lightweight little car. At four metres nose-to-tail it’s the same length as Alfa Romeo’s Mito supermini, and around 35cm shorter than the Cayman its crosshairs are set on. At 850kg, it’s also around 500kg lighter. That welterweight figure is achieved by carbon and aluminium construction, including a carbonfibre tub from Dallara, who develops the same technology for the KTM X-Bow.

A 200bhp-plus (bet on around 250bhp) 1750cc turbocharged petrol engine is mounted behind the driver and passenger (it’s a strict two seater) and powers the rear wheels via a TCT twin-clutch automatic gearbox, which also filters down to the Mito and Giulietta hatchbacks at Frankfurt. Another similarity to those cars is Alfa’s DNA system, which applies Dynamic, Normal and All-Weather modes to the throttle response and suspension. If the 4C’s system is anything like its more bread-and-butter brethren, though, you’ll be flicking it into ‘D’ every time you drive…

Also on Alfa Romeo’s Frankfurt show stand will be a 0.9-litre TwinAir version of the Mito, with the 84bhp 875cc two-cylinder turbo petrol engine from its Fiat 500 TwinAir cousin cutting emissions and injecting some character into the Mini Cooper rival.

Our video of the Alfa Romeo 4C sports car

See and hear the glorious Alfa 8C in action