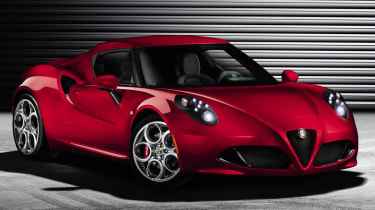 Alfa Romeo has revealed its production 4C sports car. The mid-engined, rear-drive coupe has been teased since its first unveil as a concept at the 2011 Geneva motor show. Two years later the showroom-spec car arrives, with few major visual changes. Thanks in part to a carbonfibre chassis, the 4C is set to weigh less than 1000kg – making it lighter than a Fiat 500 Abarth. Alfa is claiming a 4kg/hp weight to power ratio, which means up to 250bhp. The 4C uses a 1.7-litre turbocharged four-cylinder petrol engine (the 4 in 4C representing the car’s cylinder count). In the Alfa Giulietta Cloverleaf, this engine produces 232bhp, though the 4C gets a 25kg-lighter version that’s cast aluminium rather than iron. It also gets direct injection and is linked to Alfa’s TCT twin-dry clutch transmission rather than a traditional manual gearbox. Steering-wheel paddle-shifters will still allow control of its six ratios, though. Alfa’s DNA drive select switch makes an appearance, with a Race mode joining the Dynamic, Normal and All-weather seen in Mitos and Giuliettas. Measuring 4000mm long, 2000mm wide and 1180mm high, the 4C is shorter, wider and more squat than a Lotus Evora, Porsche Cayman or Toyota GT86. The Alfa Romeo 4C launches in 2013, attempting to rejuvenate the brand globally as well as introduce it back to America. Convertible and more hardcore, track biased versions are rumoured to follow in 2014. The Alfa 4C is expected to cost less than £50,000, sitting it directly in Cayman territory.  More details and pictures will be revealed when the production 4C makes its public debut at the 2013 Geneva motor show in March.