Tempted by one of the maddest cars you can buy? Here's what you should look for when buying a used Ariel Atom 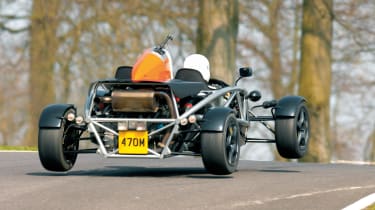 Our guide here is no less than Ariel Motor Company general manager Tom Siebert, who knows these cars inside out.

K-series-engined cars are rare, he says; if you do come across one, check for signs of overheating (though the Atom is much better for cooling than an MGF, so it’s not too much of a worry). The 165 and 190, with their hairier cams, tend to idle erratically, but it’s a harmless characteristic. Both Honda engines are practically bombproof, as is the supercharger installation; the only potential problems arise when an engine has been run low on oil and is then used hard on track, where oil-surge could result in damage. Avoid any engine that knocks or rattles. Early 2s ran rich, giving a slightly ‘chuntery’ idle, but that’s also just a characteristic; from ’05 onwards the engines are generally a lot smoother and more tractable.

TransmissionThe Rover gearbox has a pretty agricultural feel but is robust enough. The Honda ’boxes shift more sweetly, but on Atom 2s the third/fourth and fifth/sixth synchros are a potential weak point, so pay attention to the shift quality. The clutch is long-lived providing the car isn’t abused, but do check for any slipping because replacement is expensive: the parts are only £228, but labour is £792 as it’s an engine-out job.

The rose-jointed suspension does wear, particularly after a lot of hard track use, so check the condition visually and by jacking the car up to look for any play. Joints should last about five years, but replacement is expensive – budget £1300 for parts and labour, including a four-wheel alignment check. The rear wheel bearings are prone to wear on all pre-2011 cars, and if they need replacing a new drive-flange will be needed too. Budget £350 per corner. Brakes are rarely an issue, but check the steering for play. The bushes in the column wear, though replacement is only around £100.

Obviously not much to say here! The steel frame was rust-proofed and powder-coated very well by the factory, so corrosion likely points to accident damage or poorly repaired stone chips. Crazing in the lacquer suggests the chassis has had a major thump that could be costly to fix. If the frame or suspension looks neglected, it probably is. Ensure the digital display below the dials works fully on older cars: a new instrument pack costs £900! The factory, which is the only official service centre, offers inspections for £132.

Search through hundreds of sportscars on evo Cars for Sale

‘Bystanders gawp as they watch you twirl the wheel, palm the gearlever and pump the pedals. I’ve driven cars without roofs, windscreens, doors, carpets and heaters – all of which the Atom lacks – but never one whose idea of bodywork seems inspired by a Peter Stringfellow thong…

‘The Atom feels fantastically responsive, with nicely weighted, quick steering and a gearchange that’s more slick and positive than an Elise’s. Caress the accelerator and the car leaps forward like you’ve brushed it with a cattle-prod. There seems to be no inertia whatsoever, so 120bhp feels like twice that.’ (evo 015)

‘The combination of a VTEC engine with a blower is a scream in more ways than one. The thrust is almost unbelievable, and the experience of being fired towards the horizon is amplified by the Atom’s lack of skin. The gearbox is superb, but it needs to be as the revs pile on so quickly you’re constantly grabbing for the next ratio. The surge of power is relentless – intense doesn’t begin to explain it.’ (evo 068)

Only 100 Atom 1s were built and most went to Japan, so you’ll probably be looking at the Honda-engined Atom 2s and 3s. They’re still rare (total UK Atom production is only around 950), which helps keeps prices buoyant; basically, if you find one for less than £20k, be very suspicious. Early nat-asp 2s start at around £22-23k, but you’ll be lucky to find a supercharged car for less than £30k. For best residuals, Tom Siebert reckons that for around £30k you should be able to find a nice, well-cared-for Atom 3 245, ‘and at that sort of price you’ll struggle to lose money’. It’s also a good idea to buy in winter, when there’s more choice and owners are more receptive to offers.Useful Contacts