Its looks may suggest otherwise, but this latest Atom is all‑new – and a huge leap forward, too 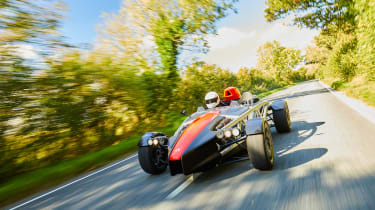 A favourite motorsport VHS of mine back in the day was Nine Days in Summer, a Ford promo film that followed the introduction of the Cosworth DFV V8 into F1 during the 1967 season. That year was the second season of the ‘Return to Power’; 3-litre engines with serious horsepower, the last full season before the appearance of aerodynamic wings – and cars unsullied by sponsorship, too. A different world, full of bold, primary colours, larger-than-life characters and majestic but savagely unforgiving circuits.

And it’s the patriotically hued British Racing Green Lotus 49 Cosworth that springs to mind now, as I stand beside the new Ariel Atom 4, nearly 20 years after the first Atom appeared. The Atom 4 seems lower, sleeker, downright faster-looking than Atoms of yore, its blood-red airbox slicked back to better shepherd the air it’s ingesting, the slim snout of a nose now providing passage to the front-mounted radiator, much like the Lotus. Sure, the tubular-frame structure doesn’t have the slippery fuselage of a ’60s F1 car, but the spindly exposed wheels at each corner and minimalist ethos riff comprehensively off those vicious monoposto racers of half a century ago.

Only the pedal box, steering wheel and top of the steering column are carried over from the old Atom 3.5; the rest of the car is completely new. The engine is still a Honda unit – a relationship the firm cherishes – but it’s now the feisty turbocharged 2-litre from the latest Civic Type R. Switching from supercharging to that sometimes demonised form of forced induction brings a little unease in a car as ostensibly pure as an Atom, but with the benefit of a new MBE ECU the motor is good for not only 320bhp but also 310lb ft of torque, the latter potentially bringing a whole new dimension to the car’s performance.

The familiar exoskeleton tubes are now larger in diameter, increasing chassis rigidity, and the revised suspension features anti-dive and anti-squat geometry, allowing a slightly softer spring rate from the new, Bilstein-damped suspension. The seats are now individual items, mounted in a wider cockpit, and while the track measurements are the same, the car is longer, mainly due to the engine installation. A small increase of around 45kg takes weight to a claimed 595kg at the kerb. Ariel’s development car is running optional carbonfibre wheels and AP Racing brakes, while the firm is now partnered with Avon, so the 4 is shod with a ZZR tyre in sizes 195/50 R16 front and 255/40 R17 rear. This is the first Ariel to have seen the inside of a wind tunnel, and it’s also the first Atom to be entirely represented in CAD. 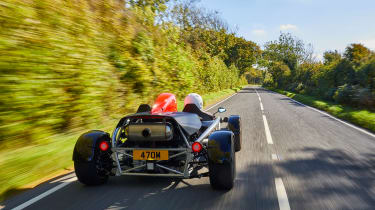 Ariel director Tom Siebert shows me the controls on the new dashboard, its hi-res tablet-like screen and brightly hued switchgear looking more like something from an LMP1 car. It’s classic Ariel – simple, but brilliantly executed. There’s an adjustable boost button, which turns through three settings. ‘Level one and you’d let your nan drive it. It’s around 200bhp. Really tame. It’s like a “wet” setting,’ says Siebert. ‘Level two is about as fast as the old supercharged car – around 260bhp. And setting three [the full 320bhp] is hold-on-tight. I would start on three – you won’t want to drive it around in the lower power modes.’

So, temps up to level, it’s time to see what the Type R’s blown four-pot feels like when I’m strapped inside a motorised children’s climbing frame with little else attached. The result leaves me breathless, slightly disorientated and screaming expletives into the Nomex lining of my crash helmet. There have been supercharged Atoms with nearly as much power in the past, but they haven’t mustered that savage stab of torque from such low revs. Floor the throttle and the Atom quivers for a millisecond, as if you’ve connected the metal frame to the mains, before slamming forward with a ferocity that makes it difficult to focus on the vanishing point. And then KER-CHUMPF, as my foot comes off the accelerator pedal and boost pressure is expelled. Even wearing a full-face lid that release of pressure is astonishingly loud: the Atom soundtrack is no longer defined by roar or whine, but by that noise. Throttle response is sharp, if just a few per cent shy of the old car’s.

It dawns on me that the ‘nan’ setting still easily bests our Fast Fleet Caterham 310R, and that it may be a decent place to begin after all. So configured, the Atom is still astonishingly quick, just without the ultimate venom that makes the world go a little bit weird. But it does mean I have the mental capacity left over to think about the rest of the experience. The driving position feels a little higher-set than a Caterham’s, but I find it very comfortable, the small aero screens more effective now at fending off turbulence. Meanwhile the slightly slower steering rack and longer wheelbase make the car less nervous. Years ago an Atom’s steering would weight up markedly in a turn, but the 4 is actually a very delicate machine to handle, requiring only carefully managed inputs to adjust its trajectory down a road. 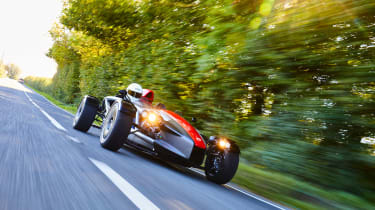 The brakes are not only obviously powerful, but couldn’t be more perfectly weighted for heel-and-toe work, while the manual gearshift requires just one finger to guide it through. A couple of times I hook fifth instead of third going up the ’box, but I soon realise the gate is closely spaced and, much like the rest of the car, needs delicacy to get the best from it. Driving the Atom 4 well feels a little like patting your head and rubbing your stomach to begin with, in that you must divorce the accelerative carnage from the overall driving experience if you’re to learn the car and drive it with any semblance of smoothness. Production cars will have variable traction control, a benefit of using a standalone ECU for the first time. Without it there’s the sense there’s a whole world of trouble, much of it enjoyable, lying in wait. In the wet it must be an animal.

Clark and Hill were the envy of the field in ’67 with their 400bhp DFVs, but they also lined up on the grid at around 700kg. Think about that. And then consider the Atom 4 costs £39,975 and, with Honda power, should be entirely reliable. That contemporary engine and CAD data also mean Ariel will soon press ahead with European Small Series Type Approval, allowing it to sell in Europe and territories beyond. Exciting times, but nothing like as wild as when you’re belted into an Atom 4 on 1.3bar boost.